So I’m going into top trumps mode here…on a scale of 5 where 5 is the hardest.

Speed/ Accent: 4 or 5 for me
(Understanding what is said)

I found this one difficult - strong accents plus it goes supersonic at one point!..two people who know each other I think!

I was expecting there to be lots of words I didn’t know based on listening but there turned out to be less than I thought. There is a medium amount of scribbling on my transcript reflecting words I have looked up - a very crude measure.

- I thought wow, chwarae teg, that is unusual - it turned out they were poisoned! (Gwenyn versus gwenwyn!)

Ah well! As long as I don’t make any travel arrangements purely in the medium of Welsh at the moment I should be ok!

This post is a experiment - as you may have guessed…,

So this is meant to share tribulations, enlightenments and hilarious moments while listening to the Advanced material, as you mentioned in @Baruch’s thread “Stuck between Level 3 and Advanced Content”, did I understand right?

I guess it may work also to compare our experiences over time as @aran was suggesting in the same thread - doesn’t it?

OMG the killer bees misunderstanding…is just an amazing start, at least on the fun side!

But after all doesn’t fun make learning easier? So that’s all good.

p.s. what about adding “Advanced content” in the thread title?
[edit] oh and maybe a spoiler alert too?

Yes, yes, yes and yes. So many good suggestions in one post!

I’ll change the title now if I have permission to do that - I’ll check.

I’m not sure about the format to be honest.

Done. I can tell you are an organising type! I’d better get it sorted!

One of the women in our Welsh class and chat group keeps bees. After a couple of embarrassing incidents when she introduced herself as a “poisoner” (gwenwynwr) rather than a “bee keeper” (gwenynwr), she now just says that she keeps bees! (cadw gwenyn).

Much safer and no chance of confusion.

I recently made that mistake. I said something about poison living in tiny holes in a cliff at a local nature reserve. Luckily @johnwilliams_6 understood and was able to correct me.
Sue

Ha, ha, thanks Margaret - there is real comfort somehow when making mistakes to know you aren’t alone!

Ha, well there you are - I’m in good company - crikey that sounds like an an advanced conversation - I’m impressed!

…and of course I have just listened to this again in the car and the supersonic thing is a myth. I won’t change my original post because it’s all about perception - which changes with time doesn’t it.

I think there is something along the lines of an ‘audio illusion’ - when you are just about following a conversation (with steam coming out of your ears!) - and it goes it bit faster… and a bit faster and suddenly you have to drop out as you can’t process it quickly enough…

It doesn’t mean it’s fast - it’s just faster than you!

…it feels likes it’s all part of the process

As soon as I finish the whole sequence, I’ll write more but in the meantime, one more note about…bees that seem to have taken over this thread!

My first goal, with Welsh, was simply learning one of my favourite songs (“Braidd” - Datblygu of course).
One of the lines happened to be: “Yn ei fel efe yw yr unig wenynen”

It took me a ridiculous amount of time to hear all the sounds I was supposed to repeat, figure out how to pronounce them somehow at the correct speed and remember them.

But one thing I’m sure of, thanks to this coincidence, I’ll always be able to tell bees from poison!

I learned the word Gwenwyn from the (same title) song by Swnami, so I won’t be getting mixed up either!

Random notes about my experience with Sgwrs 14.

How difficult?….I’ll figure out the scale… they’re all very hard for me now, even though a few recurring topics have definitely become much easier to catch - like family, speaking/learning Welsh and singing in choirs.

@beca-brown had said it would be “local history and mythology” so first of all, I set my expectations accordingly.

I understood one of the stories was about someone who had died and also recognized “ferch”, “corff” and “post mortem”. I assumed that a girl had been killed. A sort of Welsh Jack the Ripper, maybe? But then, reading the translation, I found out she wasn’t the victim…oops!
Curiously, I had noticed “mwrdwr” - but just because it sounded like part of a sort of curse in Napolitan chitemmuort I didn’t even slightly think of the English word - that I recognized reading the transcription.

As an Italian, it was easy for me to understand and I was very happy to hear the story about Marconi and to learn a lot of details I didn’t know. I couldn’t figure who did speak Welsh - just wondered and hoped it could be Marconi as well. Too bad that guy had lost the elections!

Being from Torino, I know that nitroglycerin was first synthesized here and thought I was about to discover someone from Wales was also involved in the process…but no…it was a very different kind of story. I had to read it, cause while listening, I had only caught “ceffyl” and “milltir i ffwrdd” (all words I learned from songs, by the way).

p.s. This is a test post, too. I think in the future it could be useful to write a few notes right after 1st and last listen - there’s usually quite a difference between the two.

Wow I wouldn’t miss that for the world!

They are good value for money these Sgwrs aren’t they?! They can turn into an unlimited number of alternative ones depending on who is listening!

I wish it had been killer bees now!!!

Loving hearing your tales of the listening experience! When I transcribe/translate I imagine you guys reading and try to imagine how hard/easy you’re finding it. I didn’t forsee the killer bees though!!

This week’s Sgwrs - calling Rownd a Rownd fans, and those interested in vintage and antique artefacts… the connection will be revealed tomorrow…

I learned the word Gwenwyn from the (same title) song by Swnami, so I won’t be getting mixed up eithe

I find it helps me to remember gwenwyn by thinking of it as the combination of gwên and gwyn , i.e. ‘white smile’, so a post mortem rictus

Yikes! Never thought about it that way!

A happy Dydd Santes Dwynwen to you all! 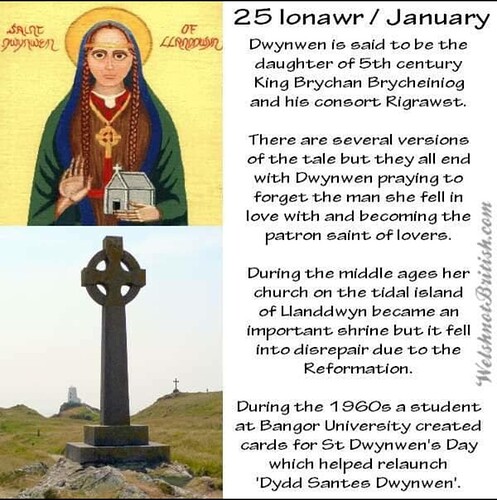