A Welsh song I sang as a child (Jambori)

Last night, I had a tune stuck in my head which I vaguely remembered from my school days. But I could only remember the lyrics to the first line. I googled it, and it was this:

My search prompted me to remember that we sang it in Jambori. This was an event held, I think, around once a year and (junior) school kids from around where I lived (I think only 2nd language Welsh speakers) would congregate in a hall somewhere and sing Welsh songs. I remember it being really fun.

Does anyone know if the Jambori still happens? Does anyone here remember attending one? I went to school in the S Wales valleys so I’ve no idea if it was peculiar to us or something that happened throughout Wales.

Told you it would be a random topic. I’m still not sure why the song popped into my head.

None of which really answers the question, sorry!

No worries, just curious whether other people had similar experiences. Interesting that they sing it in both languages in Scouts.

We sang this song in Brownies (in English in England).
Sorry I can’t help with your question.

I did a Google on Jambori and found some folk in Carmarthen running sessions for toddlers. I guess they remember what you do! I was toddling round a POW camp in Northants England at that age! My dad helped to run it!

Hello, I plan to use this song as my class entry into our school eisteddfodd. Does anyone know where I can get the tune or the English version of this song? Thank you

Sorry, doesn’t ring any bells here - maybe if you could post some of the Welsh words?

Apparently (which I never knew) it comes originally from this:

Category: Songs a.k.a. “Austrian Yodeler”, “Once an Austrian” Tune See video below. Feel free to sing even higher to make the yodeling sound sillier! Type of Song Actions, B…

I’ve never heard it with all the action sounds, though, just the ‘holiakiki, holiakwkw-kwkw-kwkw-etc-etc’…

My son cane home with a lyric sheet for this today. He has to learn it over the holidays ready for his first eisteddfod.

Can you copy it to Forum or is that illegal? 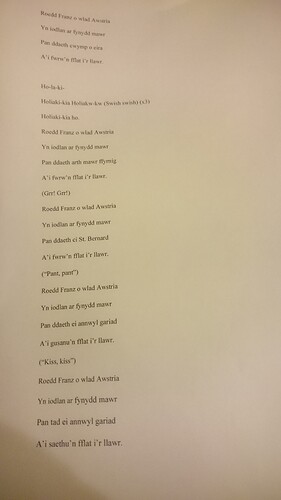 Yep Jamboris are still happening! The songs haven’t altered much either!!