Use of 'that' in Welsh

The reason there are so many ‘thats’ in Welsh is because English uses the same word for the demonstrative pronoun, the relative pronoun, the conjunction, whereas Welsh has a different word for each of these and various applications of these.
It’s a bit of a mind-boggler, but since I don’t have my GK grammar book to hand at the moment to quote from, I suggest you have a quick look at Geiriadur Yr Academi online and put ‘that’ in the search box - it’ll give you examples of when which ‘that’ is used in Welsh.

I think my weaker ones are bod and 'na. But mainly bod when you are talking about something being something if that makes sense.

Perhaps this will help a bit… ‘bod’ is kind of a lynch-pin: 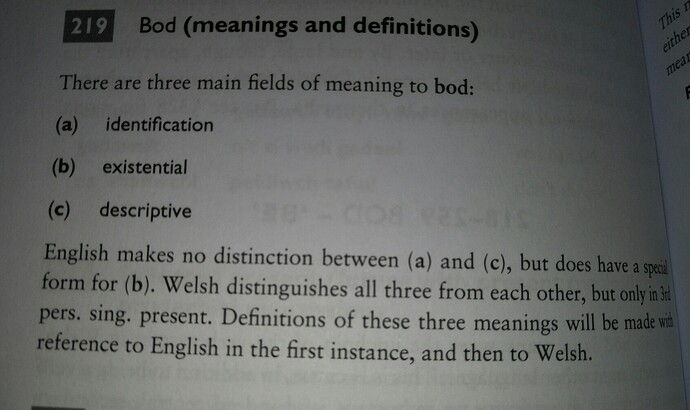 Don’t worry, it’s approached from all points of the compass.

Hope this helps rather than confuses!

Your no. 3 does get used sometimes in English, although it’s rare and sounds weird. My school Latin teacher always used to explain the ‘accusative and infinitive’ construction in Latin with reference to a phrase in the King James Bible. Jesus appears to the two Marys after the crucifixion, but they don’t recognise him, and so one of them thinking him to be the gardener asks him “What have they done with my Lord?”

Normal modern English would, of course, be “thinking that he was the gardener.”

So my example - I think him to be OK. Weird, but makes sense.

I don’t know whether it’s just me being pretentious, but I’ve always regarded leaving the that out as a bit sloppy and slangy.

I’ve been doing a lot of trying to write things within strict word limits recently and the first things I look to remove are those linking words, like “that”, “then” and “and”. I tend to write a lot of them and if I was reading a nice piece of prose or a novel, then I’d expect to read a lot of them, because it gives things a bit of flow, but I think they often serve no other purpose and if you simply want to convey a message then they are often superfluous.

Yes – but going back to the point about “English does a lot of different things with that”, some thats are optional, and some aren’t.
I think that he’s OK = I think he’s OK
isn’t that sort of the same? ≠ isn’t sort of the same

This kind of can-be-omitted that is exactly where Welsh tends to use bod: the two Marys thought (that) Jesus was the gardener.

They are – they’re all what are called ‘finite’ forms, i.e. they relate to a particular time (present or past) and need a subject to go with them (she is, they are, we was robbed, etc.) The Welsh verb-noun and the English to-form (“to be”) and -ing form (“being”) are all non-finite forms.

I’ve had a nightmare with some of the smaller, linking words in Welsh, not only the ‘thats’, but the ‘who’ and ‘which’, which link longer sentences together. I’ve read the explanations and still didn’t understand sometimes! (not being particularly grammar orientated). However, reading the grammar rules, and then reading books and magazines in Welsh frequently, and noticing where the different forms occur has been massively helpful for me. Trust that in time the different forms will come to you naturally. 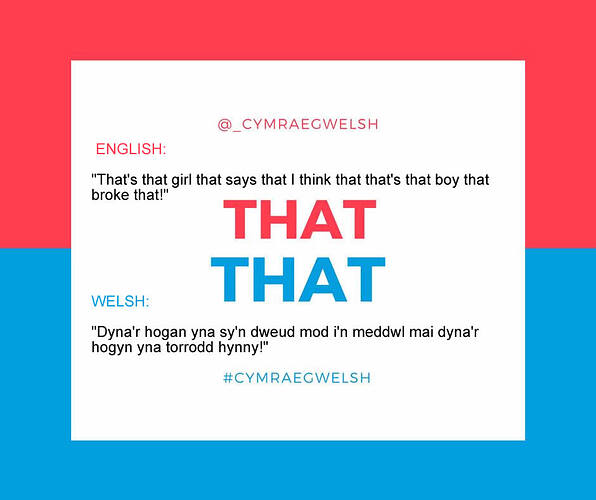 Brilliant! Sums up how awkward the English language really is.

Puntuation can even save lives:
Let’s eat grandpa.
(I’ll get my coat…)

Hi
I’m just doing challenge 10 of level 2. The sentence is:

‘We all thought that they should help us’

I don’t understand if I misheard the ‘Y’ or if it is correct why it isnt ‘bod’?

Any help much appreciated

What you use for that depends on the tense…there was a summary at the end of a previous discussion about this, in this post here

That’s very useful thanks. I’m just glad I heard it right and it’s not too much wax in my ears.

No you were spot on - good work!