Translation Help If You Need It

I guess many people will use Google Translate if they want to translate a word or phrase. However, I have found a much better translator. It can translate Welsh and many other languages. It’s called http://translator.eu It’s quite useful to type your word or phrase in both because you don’t always get the same result. I think Translator.eu gives a better result. Give it a try and see what you think.

And you could try FORVO (www.forvo.com) to pronounce the words or phrases for you if you’re not using Google Translate.

Well, that certainly seems to work 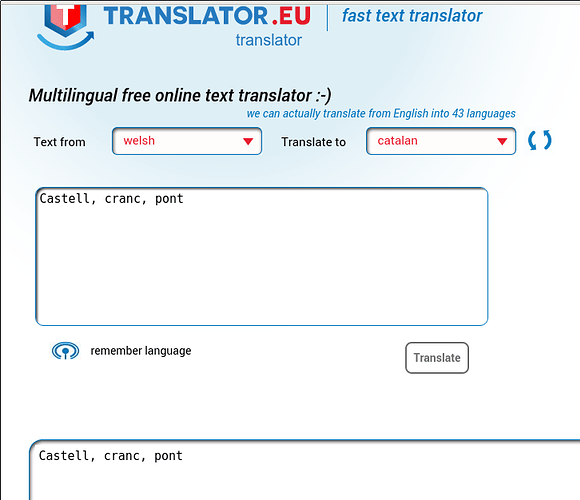 Strange. Your 3 words work with every other language, even Chinese and Arabic. Maybe you should wing them an email.

I’m sorry! I didn’t mean to cause you trouble checking – I’m afraid I was being silly, rather than sarcastic. There are a number of words that look similar, or even identical, in Catalan and Cymraeg, despite being pronounced differently – I had deliberately chosen three of them to “check”. The translator works fine… 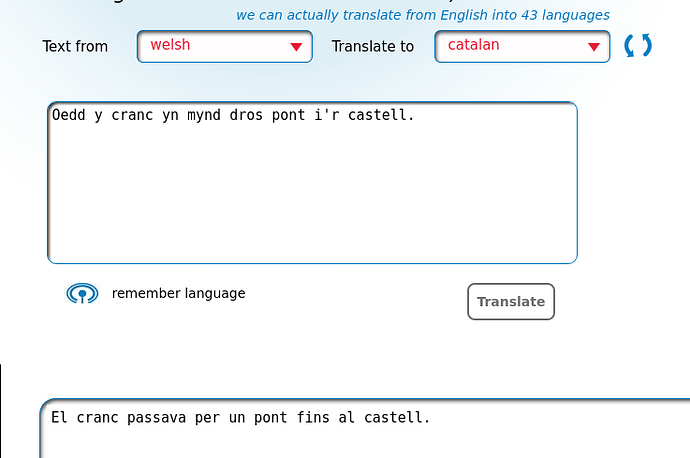 Edited to add: Google does the exact same thing with the original three words, only with the added indignity of suggesting that the Welsh might already be in Catalan anyway:

Thanks, @RobMorgan! This looks brilliant!!! I’m always looking for a good online translator.

Thanks for reminding me about this, @janhoward-1. I had looked at forvo ages ago, but there was not very much in Welsh there at all at the time. It looks as thought it’s got a LOT more words in there now.