At the start of Level 3 here, we have i dwlid e… To throw it. So far, so good.
Watching Pobol Y Cwm the other day, a character said ‘Hi sydd newydd dowlu drinc’. Well… it IS Pobol Y Cwm! But… Dowlu/towlu? I can’t find it anywhere… Though it is close to dwlid/twlid. Can anyone enlighten? Thanks.

The Geiriadur Prifysgol Cymru (GPC) lists it as a variation of taflu (which in turn is the “standard” for to throw):

That variation is the form I remember hearing as a kid and still very common in Swansea and Cwm Tawe - I don’t know how long it will last though, because kids learn Taflu at school and many younger speakers, particularly if the language of the home is English will probably use Taflu these days.

Thanks Toffidil. Fascinating to see how a language evolves.

Yes, I notice that all of the ones mentioned above are in use, so its probably ok to just use one (or more)

Dwlu = love and a mutated Towlu (dowlu) = throw, can sound exactly the same to my ear, when many people say it.

This is PyC we’re talking about so although, yes, they all love a drink this is on about a drink being thrown. I believe it was Sheryl’s mum (Jackie???) throwing a drink over Anita (deservedly so).

Ha ha. Also, I quite like Ffleng & Ffling, obviously from the English, Fling.

I’m not sure if I’d use them at Siop Siarads though, where I am on my best behaviour. 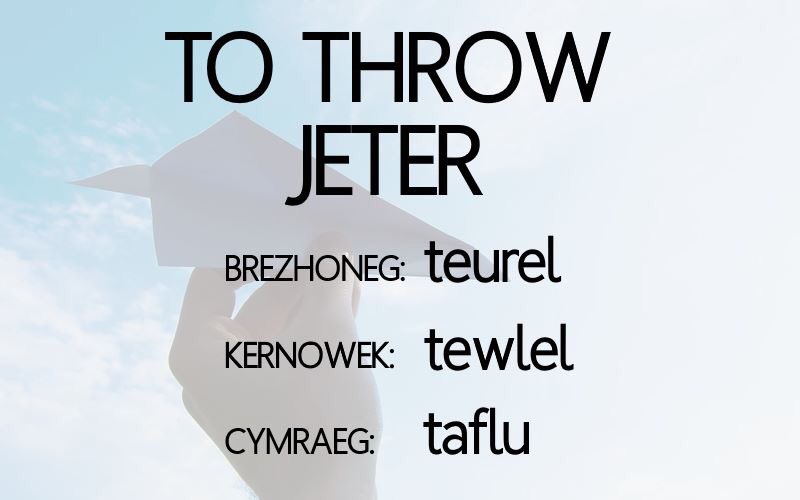