Well, this is infuriating. Awful people are everywhere. 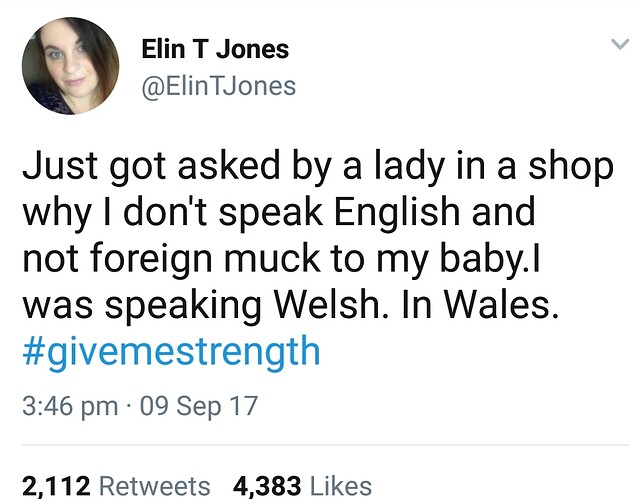 Happily, the twitter feed contains plenty of messages of support from around the world.

Ah, I don’t think this is worth getting upset about. I’m sure this lady isn’t an awful person, she just has her own opinion, and she expressed it. Fine. You cannot change other people and letting their opinions upset you just means losing energy and nerves for nothing. I think it’s absolutely brilliant and wonderful that you speak Welsh with your sweet baby!

Ah, I don’t think this is worth getting upset about.

I agree. The fact that she said ‘foreign muck’ speaks volumes about her attitude to the world and that she didn’t know it was a native language.

This is one of the reasons that I don’t and won’t belong to twitter.

I think it’s impertinent to talk to other people like this, to call their language ‘foreign muck’. You’re right, she probably didn’t even know what she was talking about and that she called a native language ‘foreign’. But reacting to such things makes no sense, as such people aren’t usually very open to other opinions, they just want to dump their frustration on someone else and in a way, enjoy seeing them getting upset and sad.

… except that it was in real life this time.

Anyway, who remembers that news story (may or may not be true) about the Asian-looking lady on a bus in Cwmbran (?) who took some stick for not speaking in English. Someone reportedly joined in to confirm that the language was Welsh

… except that it was in real life this time.

My point is that you usually can’t tell, although I have no reason to doubt this particular tweet, of course.

The huge volume of tweets produced daily means that “fake news” and much worse are not only possible, they are inevitable. Twitter and the like give them pseudo-authenticity and far wider circulation than they deserve.

May I add a personal plea not directed at anyone in particular. While I share everyone’s indignation at the content of this appalling tweet, there is nothing useful I can add on this forum apart from the obvious, that there are awful people (yes, they are awful) who say awful things. Can we stop now, please.

Just for info: I’ve peared into her profile and I’ve seen she’s got a lot of messages in support however she has written that she and that woman exchanged some words and they carried on each her own way. I’ve tweeted to her also and have got (a bit unintentionally) a lot of attention myself too. (sorry, it was not meant to promote myself though but it kind of turned like that in the end

She’s also (as much as I could see) eminent person - someone important - so she surely knows how to deal with these things.

All good at the end and many times something said (and particularly written) isn’t meant as it appears it to be so I beleive also that that woman didn’t mean any harm however she obviously didn’t even think, but just blurted out what she had in mind.

I can, however, totally empathise with anyone accused, in their own country, when speaking their own language, of using a foreign tongue and I would have tried to be polite when pointing out to the woman that she was in Wales, but that, if I had been from Poland speaking Polish, her comment would have been just as unacceptable to my fellow non-racist countrymen and women. I am sure we all agree with that and that the subject could now, reasonably, be ended. I would have been tempted to ask if she always speaks nothing but French in France and why she was speaking English in Wales, but that would have been naughty of me!