I have a few questions based on the past few lessons I’ve done. If anyone can clear things up for me I’d really appreciate it! Also sorry about the spelling.

Why does “ifanc” come after the noun, but “hen” comes before? Eg hen ddun vs dun ifanc

You can use either sydd yn or sy’n whenever - sy’n is just a contraction of sydd yn, so it’s like the difference between can’t and cannot in English.

You’ll find that every adjective aside from hen will come after the noun (at least every one I’ve come across so far). Hen is just an exception to that rule.

The last one is a little trickier to explain. Oni’n (the positive form of doni ddim) is the continuous past tense form, so it’s used when implying that an event carried on for some time, where as nes i implies a single moment in past tense. So - oni’n mynd is I was going, but nes i fynd is I went.

Hope you find that helpful, but I’m sure loads of others will explain it better than me.

Shwmae Hefin,
To add to Karla’s response, in simple form,
“Wnes i ddim…” is “I did not…”, and
“do’n i ddim…” is “l wasn’t…”.
Figuring out which one to use is the tricky bit while you’re getting used to using them, but will come naturally to you with plenty of practice.
There’s a lesson in (old) Course 2 that covers this in some detail, and finishes with practices where you are choosing the right one for the context of the English you’re trying to translate. Unfortunately I can’t remember which one now! But if you’re doing the new course it wouldn’t be advisable to use this lesson to help as there will be tons of words you haven’t come across yet!
All I can suggest is just trust in the method, and soon you will know which one to use without realising it!
Pob lwc!
Gav

Karla, Gav, you’ve both been putting SO much into helping people out - it is hugely, hugely appreciated, and I am, literally, at this very moment, raising my hat to you…

[It’s a rather fine dark blue trilby, if you’re interested…;-)] 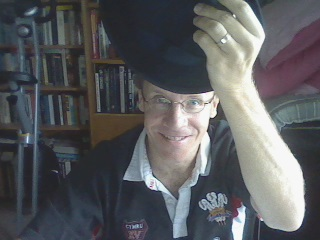 It only seems fair - I’ve received an enormous amount of help myself from everyone here!

Hen is just an exception to that rule.

Two other exception which are perhaps useful to know are “de” and “gogledd”, as in
“De Cymru” (South Wales) and “Gogledd Cymru” (North Wales).

(Well, strictly speaking, according to two online dictionaries, only “de” is an adjective, whereas “gogledd” is a noun, and “gogleddol” is the adjective (“northerly”, “northern”). “de” seems to be both the noun and the adjective).

While I have been typing this I’ve realised that in the examples I gave, “de” and “gogledd” are probably being used as nouns, and when two nouns are placed together it normally indicates a possessive situation, i.e. “the something of something” e.g. “the North of Wales” and “the South of Wales”.

However, there are a few other genuine exceptions to the adjective rule.
“hoff” (favourite) and
“prif” (main or chief)
are two of them.

(I got those from a BBC web page. However, it contains a lot of other stuff which might be confusing at this point, so better really just to continue with the lessons and not worry too much about “grammar” at this point, so I won’t give the link, unless you really want it.

Diolch, I didn’t realise there were other exceptions. I’d be very interested in that link, though.

Diolch everyone! That helps a lot

(If Aran asks, you twisted my arm, ok?

Never thought I would read through 6 pages of grammar but I actually really enjoyed that! All those questions I had have now been answered! To each their own I guess.

I’m going to put finding that lesson on my to do list, I have a big problem with this at the moment. I make sure I stick to talking about things I do or are happening right now, I must sound like a right simpleton.

I just had a chance to look through the pdf. It was very helpful!

I love this forum. I love the internet. I had these exact same questions and here are the answers. Thanks, everyone! For asking and for answering.