This morning I caught an engineering test for the new DAB radio channel - Radio Cymru 2. It sounds like it’ll be similar to Radio 2 and Radio 1 English equivalents. First show is with Carol Parry-Jones, or as @gruntius calls her @siaronjames. Huw Stevens on a Friday night. Lisa Gwilym on a Sunday morning. And others I’ve forgotten. It sounds really promising.

It’s digital. So available on line (no idea about abroad, sorry) through the TV and DAB radio. The more listeners it gets the more it’ll grow because that’s how they monitor these things.

Anyway, I hope you all enjoy it.

First show is with Carol Parry-Jones, or as @gruntius calls her @siaronjames.

Yes. It was trialled last year and was considered to be a success.

The idea is that the breakfast period is key to radio broadcasting - it’s the time when people need information and/or entertainment to set them up for the day, but they don’t have time to concentrate on television, particularly if they’re travelling to work. But there are generally two types of breakfast radio - the hard news, Radio 4 (in UK terms) model and the lighter, more entertainment-focussed Radio 2 model. And there’s only one Radio Cymru. So currently, Radio Cymru’s serious stuff finishes at 8:30 and Al Hughes takes over with the lighter stuff. This is a very awkward compromise, so Radio Cymru 2 is designed to split the morning broadcasting in two and offer this genuine and important choice.

There have been controversies, however. The trial featured some exciting new talent as presenters, such as Elan Evans, the Cardiff club DJ and promoter, but Radio Cymru 2 is being launched in the safe, some might say tired old, hands of Daf Du and Caryl Parry Jones. Even Huw Stephens and Lisa Gwilym at the weekends could be considered to be relatively old stagers by now. Some people are considering this to be an opportunity wasted, but it’s early days and maybe the station needs a safe pair of pairs of hands to get it established. We shall see.

BTW, we can’t get anything other than the UK-wide DAB stations out here in the remote middle. This will have to be addressed before they start to turn off FM transmissions.

Elan Evans went to Glantaf with Emma (my partner), she’s a really promising star (also Huw Stephenson niece), and I reckon she’ll be a feature before long. Considering how much she played at Caffi Maes B and Maes B itself last year.

So the station is live finally! Will pear in and take a listen.

How do we find it on the radio please? Come to think of it, does digidol even work like that (tuning in) or do we just search?

Anyway, is it also on VHF or whatever (normal radio)?

Digital only. My car has a station list so it popped up on their

Also online http://www.bbc.co.uk/programmes/b09plwg7 and on the BBC Radio iPlayer.

On their page it says it actually starts on 29th January. I’ve searched on TuneIn app and it’s not there yet either. I don’t like to have 1000 apps to ba able to listen different radio stations so I’d probably just wait for it to come on TuneIn app.

Oh, by the way: What’s with Radio Cymru Mwy? Is Radio Cymru 2 its substitution or it still exists? Not that I listened to it too often if ever at all as I actually never was able to find it on any app but I’m interested in what happened to it anyway.

So long as it does not mean the threat of fewer resources going into Radio Cymru 1 (as I suppose it will end up getting called), then this is probably a good thing.

Radio Cymru was always a bit of a compromise between a sort of Radio 1, Radio2 and Radio 4 (in BBC national radio terms). As I’m more of a Radio 4 listener than a Radio 2 or 1-type listener, I doubt if I will be listening to Radio Cymru 2 all that often, but I’m happy for its target audience.

Radio Cymru mwy was the pilot test. They decided it was successful and so developed Cymru 2

Thank you @AnthonyCusack. I thought it might be something like that. I hope Radio Cymru 2 would be found on major radio stations apps now and found a bit easier than it was Radio Cymru Mwy.

I do listen to Radio Cymru on the way to work and Aled Hughes does a good job. Breakfast radio Is always a tough slot as you have to try and give every audience something without offending anyone. I can see the point of the split though.

How ageist Rob!, it doesn’t matter how old they are as long as they do a good job. John Peel was still on Radio 1 up to his passing. He may have played the odd record at the wrong speed, but he was still one of the best DJs ever.

“BTW, we can’t get anything other than the UK-wide DAB stations out here in the remote middle. This will have to be addressed before they start to turn off FM transmissions.”

I thought the idea of switching off the FM signal idea was soundly squashed last time it came up, are they at it again? I have a DAB radio, in Cardiff, where we have 4G, fibre internet and everything, and you know what, I switch the set to FM because the reception is better for the main stations. The internet killed DAB.

I do get nostalgic for my old bedroom in Builth where the walls were plastered with blu-tack holding up my industrial strength ariel, so MW didn’t sound dreadful. Being in 6th form when Simon Bates announced 'I can’t remember the last time we did one of these, but from today you get Radio 1 in glorious FM in the Llandrindod and Builth Wells region on 97.9 FM" after years of hearing the jingle ‘Radio 1 FM’ on MW. I still needed the elaborate ariel for FM reception.
i just can’t see DAB ever replacing analogue. The BBC would be too scared of losing their core listeners, especially as they remain under threat. it’s too niche. I think most people either listen to FM or on the internet. Who has more than 1 DAB reciever?

Sorry Rob, rant over, but it was the ageist thing that got me.

How ageist Rob!, it doesn’t matter how old they are as long as they do a good job. John Peel was still on Radio 1 up to his passing. He may have played the odd record at the wrong speed, but he was still one of the best DJs ever.

I hope you weren’t accusing me of being ageist, Gareth. I was only reporting the controversy, and I hope I was even-handed.
Nevertheless, I’ll see your John Peel and raise you Dave Lee Travis.

John Peel was still on Radio 1 up to his passing. He may have played the odd record at the wrong speed, but he was still one of the best DJs ever.

Well said, @Y_Ddraig_Las! Except I would go further and say he was the best ever. I still miss him. I wonder how he would have felt at the sad passing of Mark E Smith (my musical hero) this week? John Peel was responsible for me (a) becoming a Fall obsessive and (b) indirectly responsible for me learning Welsh (albeit long after he died) with his championing of Welsh language bands - especially the mighty Datblygu.

It already has where I live

@robbruce “Some people are considering this to be an opportunity wasted, but it’s early days and maybe the station needs a safe pair of pairs of hands to get it established. We shall see.”

That’s my fear. I occasionally listen to Radio Cymru to practice listening to Welsh but I find the music depressingly bland and have to switch off after a short while. From what I’ve read about RC2, I’m not optimistic of that being addressed. It does all seem very safe. Let’s give it a chance, though.

I can think of more suitable names. I wish i hadn’t mentioned him now.

Getting madly off topic, but this picture was doing the rounds on social networking this week. That’s me in the white shirt, bottom right. 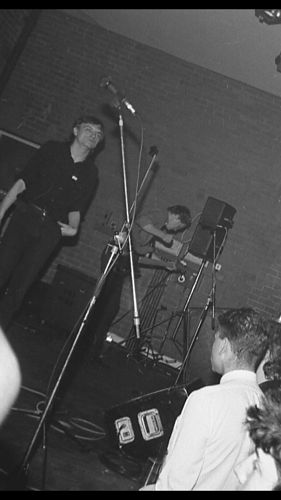