I have no suggestions for you, but just be aware that having ‘religious’ readings and content in a ‘civil’ wedding ceremony can be a bit problematic. Be aware this and run any choices by the registrar first. And may the day, and the life ahead of you, go well.

We quite like “Priodas” gan Dic Jones and Mi gerddaf gyda thi.

As some of you know I am getting married next year.

Yn cyntaf, llongyfarchiadau mawrion mawr - for finding someone to make an honest man of you. I wish you both a lifetime of happiness.

Some years ago, my brother chose to get married in Dublin (he’s a Welshman, born in Aberdeen, living in England and his wife is a Geordie - go figure

) I chose to read an extract from a Dafydd ap Gwilym poem firstly because he is allegedly buried 5 minutes from here and secondly because of its repetition of the prefix “cyd” = “together” - a key element in a happy marriage. The “stage” was shared by the Irish band “The Fureys” whom Gordon and his wife had previously befriended - so you can imagine the “craic” at the ceremony and the following celebrations.

Anyway, this is what I read (with an English translation) 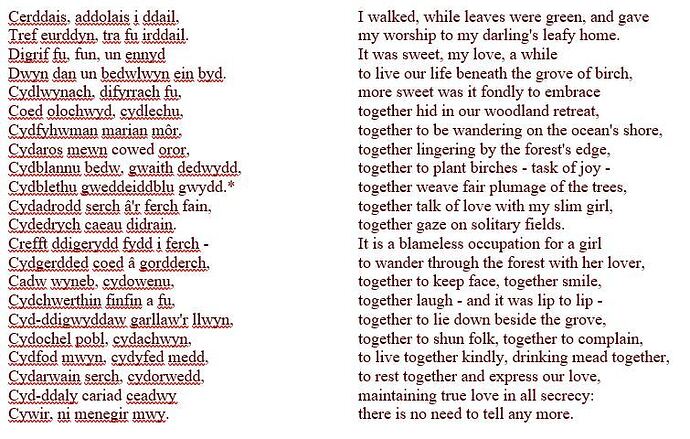 I am very lucky indeed. Not only has is she making an honest man out of me and all the rest, she’s also gets my sense of humour and pretends I’m funny!

Congratulations to you both.
I agree. 1 Corinthians chapter 13, verses 1-13 or perhaps 4-13 if you preferred. You would have a well known passage which would be Christian but not religious (I’m sounding like @Garys, now). Also you get a freebie Cymraeg translation thrown in.

It is a lovely passage - Emma pointed out that: “It does not insist on its own way” made not be the most accurate for her…her words not mine

All jokes aside, that’s a lovely reading

As margaretnock has already said, it would be problematic. Take a look here:-

Marriages and civil partnerships in the UK

How to get married or form a civil partnership in England and Wales, giving notice of marriage at a register office, visas, paying fees


Privately, I think if you ask the Registrar, there would be scope for a little latitude, but I would check first.
I personally love what hewrop has suggested, it’s beautiful!
Llongyfs i’r ddau ohonoch!
3 Likes
AnthonyCusack October 8, 2017, 8:33pm #12

Yeah, I can imagine. As I say, we don’t have strong feelings either way. We’re not practicing, but we appreciate that religious pieces have some beautiful language. Gwahoddiad and Amazing Grace (as well as Pererin Wyf) are two (three) of my favourite songs.

If I were getting married today, some 30 years after the first and, please God, only time, I would have this somewhat un-romantic but 100% true poem, read. It is in English and you want something in Welsh, but perhaps you know someone who could translate it, or you and Emma could work on it together. It appears that the Dic Jones poem, Priodas, is a Welsh version of an American piece, so why not?
And of course, all these suggestions could be read at the party, meal, gathering afterwards. They don’t have to be in the ceremony itself.

There is a kind of love called maintenance
Which stores the WD40 and knows when to use it;

Which checks the insurance, and doesn’t forget
The milkman; which remembers to plant bulbs;

Which answers letters; which knows the way
The money goes; which deals with dentists

And Road Fund Tax and meeting trains,
And postcards to the lonely; which upholds

The permanently rickety elaborate
Structures of living, which is Atlas.

And maintenance is the sensible side of love,
Which knows what time and weather are doing
To my brickwork; insulates my faulty wiring;
Laughs at my dryrotten jokes; remembers
My need for gloss and grouting; which keeps
My suspect edifice upright in air,
As Atlas did the sky.

I may have just had a little cry after reading this thread. Congratulations @AnthonyCusack, may your wedding be the best.

I quite like this one, a translation of Khalil Gibran, which my sister and her husband had read at their wedding. It’s a statement of love and belonging, and mutual independence all at the same time.

But it’s not everyone’s cup of tea. My grandparents were muttering quite loudly: “What’s she on about? Does she want them to get married or not?!”

That is a lovely poem. It’s added to the English list

Ah, I wasn’t aware of those restrictions. On the plus side, I’ve been to a couple of family weddings held in hotels, which were first class. Mainly because in each case the content genuinely reflected the lifestyles of the bride and groom, but also because the MC/registrar showed a genuine interest and willingness to join in the ceremony.

Llongyfarchiadau. Love @hewrop’s choice. Whatever you choose, have a great day.

I’ve recently found an article with many non-religious readings. They are just very beautiful and romantic. Here it is: https://www.poptop.uk.com/blog/16-best-non-religious-wedding-readings/ , have a look, I think it may be of some help for you (you could translate them into Welsh, I don’t think it’s a big deal once you find a reading you love).

What a great link Helen! Diolch

Anthony and Emma were married last September and are now expecting their first little one!

Here’s a link to one of their wedding day photos… 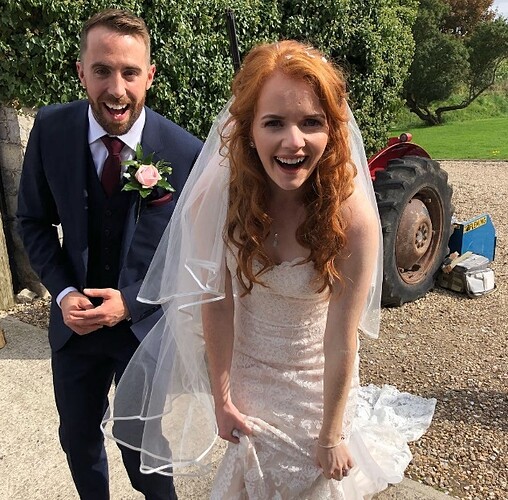 Yesterday was, by far, everything we could have hoped it to be and more!! My head is still spinning and we’re both feeling quite overwhelmed with all the love and support we’ve experienced. Thank you so much for all of your messages. Thank you for...