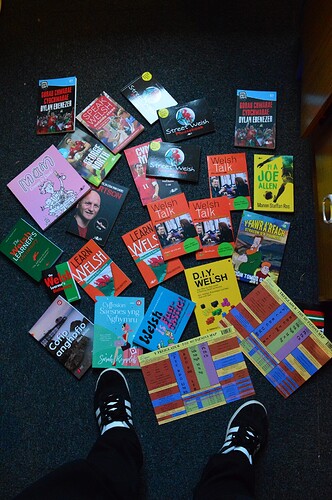 OK, so as my reward for getting into the final of Dysgwr y Flwyddyn, I was given a trophy and a cheque for £100. So thanks to the Eisteddfod for that!

I didn’t really want or need either, as the amount of people I’ve encouraged to start learning Welsh has been more than enough of a reward for me, and even if I went on and won - this would just be a £300 book giveaway, or maybe a £100 book giveaway and putting a couple of people through a 6MWS course or something!?

I gave my trophy to Siop y Pethe in Aberystwyth for them to display, as they’ve been awesome with me over the last year and a half and have really been like a second family. I wanted to give the trophy to SSIW, but I knew that @aran and @iestyn would’ve objected, forced it back into my hands and told me off!

The moment SSIW gets a standard office, the award can go back to them as rightful owners

So, with the £100 cheque, I debated what to do with it - I toyed with giving it to a charity, but I struggled to find a charity specifically for the Welsh language - there are some candidates out there, but they don’t really come under the “charity” umbrella.

So, with that in mind - I just went down to Siop y Pethe first thing this morning and bought £100ish worth of books and materials for learners that I’m now going to give away to learners for free.

Big thanks to Siop y Pethe for giving a discount as well, which meant that my £100 stretched further than it normally would’ve! They’ve essentially given away 3/4 books here by taking part, so massive thanks to them!

I’m just taking a register of what I actually bought, but if there is anything on this forthcoming list you would like - or if you want something for a friend, please let me know and I will try and sort it out for you

Only rules I would say are, please use them to encourage our language to grow. Once you’ve read and used whatever you’ve grabbed, I would be really chuffed if you could pass on your books to someone else who is just starting their Welsh language journey…

If you see something you want, send me a message and I will aim to please. I can either give you the book in person, or if you’re happy to send a SAE to me I can return it to you - or if you’re willing to make a charity contribution to a suitable Welsh language based charity for the amount of the postage, I will happily send the book out to you

This is very generous of you, Nicky. Diolch yn fawr iawn!

OK, so as best as possible, I’ll update the list above as things get taken.

2 x “Y Treigladur/The Mutations Map” by Ulpan (This is the poster one!)

Make it go away!

I will admit that after looking at it, the idea of someone actually sitting down and actually learning mutations seems so painful!

Please may I put in a request for Cofio Anghofio? I was thinking of buying it anyway. Of course I’ll pass it on when finished with. Happy to send an SAE, donate to charity or meet up (I’m going back to work in Cardiff in September). Whichever is preferable (although I’ll need you to suggest a charity).

I’ll put Cofio Anghofio aside, and I’ll send you a message now with my address

Hi @Nicky, your gesture is exceptionally kind. I hope that someone tells the judges about this so that they know what someone who genuinely puts others learners first does with their time and resources.
Seren y Steddfod amdani.

Congrats Nicky, you deserve it.

Could you keep any novel for me, please? When my subscription to Golwg runs out, I want to get back to reading books for fun! (You won’t mind if I read at the table at the hamburger joint?)

Will do and have done! One kept aside specifically for you!

Hi @Nicky, your gesture is exceptionally kind. I hope that someone tells the judges about this so that they know what someone who genuinely puts others learners first does with their time and resources.
Seren y Steddfod amdani.

This gesture is one more winning thing. I don’t match the conditions to qualify but thanks for the list. For some books I didn’t really know they exist so I know what to search for if I’m in need.

Hi Tatjana… If you see something here that you want, you match the list!!! Even if you can speak Welsh already like you.

To the rest of you, there’s still loads left!

Someone has to take these bloody mutation charts off my hands! I fear if I throw them out they’ll end up back on my doorstep tomorrow

It’s a great offer Nicky, thank you so much and if you’ve got the larger dictionary left I would make good use of it.

Yes that is still here. I’ve put it to one side for you and taken it off the list.

Will DM you now

Well done for doing this Nicky, very decent of you.

Just for a different angle and idea for next time can I mention what ‘we’ do in y Saith Seren in Wrecsam. We have a small, but quite comprehensive, library of Welsh books for people to borrow. It has been quite successful with books coming and going reasonably regularly. I’ve donated quite a few books to it over time (doubles of books I’ve read, not my books. I still have all my books.) If there’s a supportive cafe that you use for Welsh meetups in your area perhaps they would be happy to have a small bookshelf in a corner somewhere. (I say ‘small’, ours has grown to probably more than 50 books now.)

I did think of this, we’ve got something very similar running in Cafe Cletwr about 8 miles up the road from me in Tre’r Ddol. The only problem was, as they’ve only recently opened (re-opened) and taken a new stock of books from the Welsh Books Council, they already had one of everything I had on my list