I’m still reeling from the information in ‘Extinction: The Facts’ (BBC1): one million plant and animal species are facing extinction in the near future. And it set me thinking again about language extinctions.

The UNESCO ‘Atlas of the World’s Languages in Danger’ (2010; available to consult online) lists 228 languages which have gone extinct over the last 50 years. And the process of language extinction is speeding up; another 557 languages are listed as critically endangered.

In her book, ‘Braiding Sweetgrass’, Robin Wall Kimmeridge gives an interesting insight into the difficulties of trying to learn the critically endangered language, Potawatomi, of a culture radically different from the English-speaking culture in which she was raised. And when describing a language class, she explains why learning the language matters:

'There was a great deal of excitement about the class because, for the first time, every single fluent speaker in our tribe would be there as a teacher. When the speakers were called forward to the circle of folding chairs, they moved slowly - with canes, walkers, and wheelchairs, only a few entirely under their own power. I counted them as they filled the chairs. Nine. Nine fluent speakers. In the whole world. Our language, millennia in the making, sits in those nine chairs. The words that praised creation, told the old stories, lulled my ancestors to sleep, rest today in the tongues of nine very mortal men and women. Each in turn addresses the group of would-be students.

'A man with long braids tells how his mother hid him away when the Indian agents came to take the children. He escaped boarding school by hiding under an overhung bank where the sound of the stream covered his crying. The others were all taken and had their mouths washed out with soap, or worse, for “talking that dirty Indian language”. Because he alone stayed home and was raised calling the plants and animals by the name Creator gave them, he is here today, a carrier of the language. The engines of assimilation worked well. The speaker’s eyes blaze as he tells us, “We’re the end of the road. We are all that is left. If you young people do not learn, the language will die. The missionaries and the U.S. government will have their victory at last.”

'A great-grandmother from the circle pushes her walker up close to the microphone. “It’s not just the words will be lost,” she says. “The language is the heart of our culture; it holds our thoughts, our way of seeing the world…”

UNESCO lists Welsh as ‘vulnerable’. It doesn’t feel vulnerable at all in the safe space of this forum - it feels as if it’s blossoming. But of course, it will remain vulnerable even in its heartlands when speakers are surrounded by a sea of English online and on the street, making it challenging to live life through the medium of Welsh.

And thousands of other languages are much more endangered than Welsh. Does SSi, which has helped so many people, (much to our surprise), to learn another language, have anything to offer those languages, before it’s too late?

Thank you for sharing these insights Bronwen, the book sounds fascinating and heartbreaking at the same time. Have you read ‘Island on the Edge of the World: The Story of St Kilda’? Another fascinating yet heartbreaking story of the extinction of a community.

In her book, ‘Braiding Sweetgrass’, Robin Wall Kimmeridge gives an interesting insight into the difficulties of trying to learn the critically endangered language, Potawatomi, of a culture radically different from the English-speaking culture in which she was raised.

One for your shelf @aran?

I must read that book - have been wanting to read something of hers for a while. It is heartbreaking and appalling to think of the damage that has been done to indigenous cultures across the world in this way.

I’ve been really struck, while reading people’s stories of why they want to learn Cymraeg, by how many relate that their parents or grandparents were native speakers but never used their language in the home, even actively discouraging it or seeing it as something that would hold their children back in life. Even though, as you say, Cymraeg seems to be blossoming at the moment (and hopefully will continue to do so), so many people and families are still having to contend with that damage. To be part of a culture whose language is close to extinction is almost unimaginable.

I’d like to chime in and say the insights in Robin Wall Kimmerers book are well worth the read. It got me thinking a lot about many things, but it is one of the reasons I have picked up Welsh again, the descriptions of language and thought and outlook spoke to something I’d never noticed in myself, and the privilege I had as a child to learn bilingually, even if young me didn’t appreciate it at the time!

I know I’m reviving an old link, but i thought this was interesting and relevant if sad 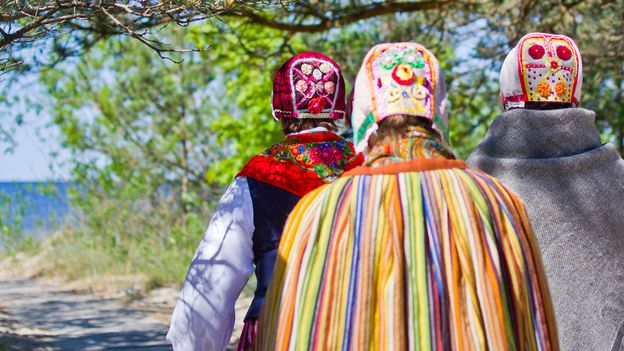 With a population estimated at just around 200, Europe's smallest ethnic group is fighting to save its language and culture from extinction.

Thanks @charlie-o, very interesting read and possibly there is some hope that this language has a future.

Oh wow! This is so wonderful to see an article writen about, and to hear about the people, few though they may be, who are continuing their traditions.
I once tried to learn Livonian, but being on a different continent and also not very plugged in to the internet (though there certainly was far less on the internet at that time) I didn’t get far.
Diolch for sharing this again!

Diolch Bronwen! I have grown up in a historically Potowatomi region of America, and always wondered as a child why we were all speaking English instead of Potowatomi. I had an unusual perspective growing up, to say the least. I have looked around about how to learn the language, and there is a free course on Mango Languages. I did a bit, but it didn’t suit me nearly as well as the SSiW. Anyway, I love Robin Wall Kimmerer and am always so happy to see her mentioned. (I actually worked with her books a lot for my undergraduate philosophy thesis, but that hasn’t put me off them!

Have you read Gathering Moss as well? There’s a bit less focus on language, but there’s beautiful reflection shared of traditional ecological knowledge interacting with the scientific disciplines of botany and ecology.
She also has a bit in Gathering Moss about naming, and the names of plants. I always think of the What’s Outside thread we have, and especially all the bilingually captioned photos from @ramblingjohn