Our village, where I lived until 2002, (New Tredegar) was 4miles as the crow flies from Aberfan. (Over the valley ridges of the Darren and Merthyr valleys) or 12 miles by road. I asked my father about the disaster many years ago, on one of the anniversaries. He told me that he was working the night shift at the local colliery (Elliot’s) on Thurs 20th and had gone to bed on the Fri morning as usual. He was woken up early in the morning by his colleagues banging on the door and windows.They told him what had happened and that were children still buried alive. They said they were going back into work in the colliery so as to let the morning shift free (who would be fresher than themselves) to get over to Aberfan to help dig the children out. My father was shocked . He went with them back to work and a couple of open lorries full of miners with picks and shovels and rescue gear set out. My father worked most of the day but sadly no child was pulled out alive after 11am. It was a week before all the bodies were removed. It was only a small thing he did, but I was proud of him. A terrible time. A double disaster, the landslide and the cover up.

I’ll just say I never understood George Thomas insisting on the money intended to help families being used to clear the tips!

Just catching up and have seen the post. I am from a (100 %)coal mining background, my grandfather and dad and brothers in laws were all coal miners as I am from Mansfield, North Notts,( basically, mines, miners and pits was all my world) I was 11 years old when I heard the awful news. We all were shocked it brings it home to you, The mining community was a wonderful community they were like family, I understood how those brave people turned out to search for the victims working tirelessly, many with there hands. next to the junior school which I attended stood a big black hill, a tip, and I remember looking at it and hating it every day. 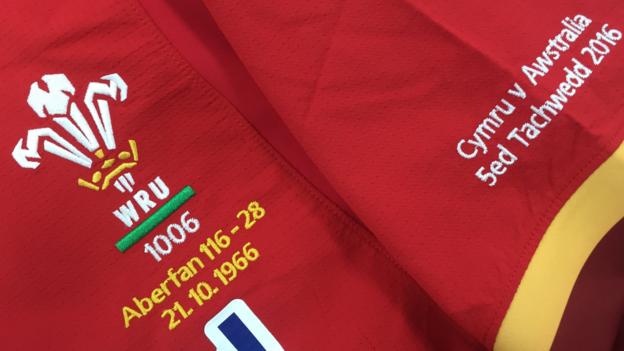 Wales will wear an emblazoned jersey against Australia to commemorate the 50th anniversary of the Aberfan disaster.

Yn wir! Diolch yn fawr. Will be watching this afternoon on TV.