I know some of you could do this!

“wearing my work hat” again - Cwmni Da are looking for contestants for a new S4C quiz show, and are particularly keen to include learners.
They asked me where would be good places to advertise for confident learners and guess what I said…!

I know there are learners here who are up to this, so please consider giving it a go!

@aran, @Deborah-SSi could you possibly mention this in the emails too? 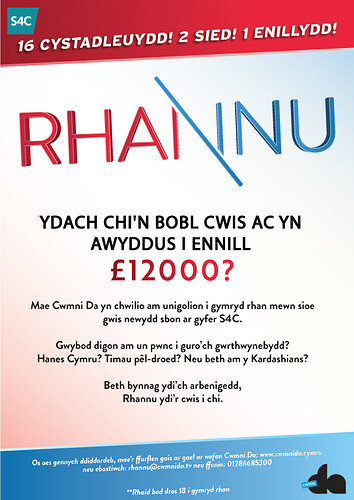 It sounds a bit like the first half of Mastermind, where you answer questions about a specialist subject. I can think of quite a few people on this forum, who seem to be obsessional about a fairly esoteric subject… you know who you are.

I’m just reviving this thread because we’ll soon be filming another series and need more contestants! (the first series is still running - Wednesday nights on S4C, or catch up on clic if you want to see what it’s like!)

As it says in the thread title, I know some of you could do this (even though you may think differently…

), but even if you don’t fancy taking part yourselves, could I ask you to spread the word and tell any other Welsh speakers you know, in case they’d like to have a go?
Diolch

Helo,
Have you got this up on twitter…I could share there and twt…

I imagine one of my colleagues will have put it there - I don’t do twitter myself. I know we’ve put it on facebook.

I watched an episode last night after reading this, I have a question. It seems like the ones who don’t win go on to the next episode to try again, is the whole series filmed in one day?

It’s filmed over a weekend or two I think (not 100% sure as I wasn’t involved on the studio side of things), and yes, 15 from each episode go on to play again and are joined by someone new (to replace the person who won) each time so that each programme starts with 16 people.

Kind of ‘Deal or No Deal’ (as in Noel Edmunds, not Br****t) meets quiz show type thing

So … you could potentially be on the show for ever?

hehe, well…
no, only for one series. Once the series ends, everyone goes home and only those who won episodes will come back later for the grand final with their counterparts from the next series. That’s why we’re recruiting for contestants for series 2 now.

So are there 6 episodes per series? So many questions but I haven’t got any holidays left in work and trying to determine whether I could even get there in the first place.

There were 8 episodes recorded for the first series, and I’ve looked in the file - they were filmed over one long weekend (Friday, Saturday Sunday).

If you want to have a no-obligation chat with my colleague Elin Tomos (she’s looking after the recruitment) to get more information, you’d be more than welcome - rhannu@cwmnida.tv or phone 01286 685300 (extension 205)

By the way as a viewer:
I missed the first that was already gone from Clic, but I’m seeing the available episodes, and I think they’re great for learners!

They speak with clear, understandable, short sentences (that’s how a quiz works, obviously!).
It’s light and entertaining, and you get to learn new vocabulary and quite a few things about Wales too!