How can I stop myself getting discouraged?

This might end up as a rant, but I would like advice on how to not get discouraged.

After two unpleasant encounters with fluent speakers on a Discord server for Welsh learners from Reddit a few months ago I completely stopped my daily chats with other learners at work.

The other day this all changed when someone at work who learned Welsh almost 30 years ago started chatting with me and was very patient and encouraging.

I felt so buoyed up by it especially as I haven’t met with this kind of support outside of lessons before.

However, today at work while I was busy (and really stressed to be honest) this same person started talking to me.

To begin with it was fine- exchanging pleasantries. But then she said something I didn’t understand (it was in the noisy, echo-y breakroom, I haven’t got great hearing, she tends to talk quite quietly, I was stressed today as I mentioned) and because I didn’t really hear/understand/wasn’t in the mood for talking (in ANY language) I just made a guess at the required yes/no and went with ‘naddo’.

Well… It looks like I was wrong because she launched into a lecture about how it should be ‘nag oes’ (still absolutely clueless about when it’s ‘nac’ and when it’s ‘nag’ but people certainly seem to have strong opinions about it!) and about how I need to listen to the start of the sentence to know what yes/no to say… Well that’s great if you can hear the start of the sentence!

I feel so stupid because in a quieter environment I’m not too bad at working out the correct yes/no answer.

It’s also one of the things that the person on Discord had a go at me about (I said ‘nac ydw’ when it should have been ‘naddo’: I never seem to be able to remember that you use ‘naddo’ with ‘wedi’ questions.

So I’ve pretty much gone back into my shell with speaking Welsh again and I’m feeling really discouraged. Sometimes I just want to scream “I’m TRYING, OK?? This is hard enough when I’m not confident talking to people in my native language, let alone in Welsh!”

I know she may have been trying to help but I feel so stupid and it’s really dented my confidence again.

This doesn’t sound like a “you” problem. You’re a learner and all learners get things wrong at times, and it should be expected that we get things wrong - its part of the process. I definitely struggle with Yes/No responses at times, amongst many, many other things.

I can understand how a noisy environment adds to this too - how many times do we mishear or misunderstand in our first languages in such circumstances?

I’m afraid at times we come across discouraging occasions, but you need to remember that you are doing something that, while difficult, is amazing. Just compare what you know now against where you started - you’ve already taken the hardest step, and now you can have conversations in Welsh! The fine tuning is great and will come, but it seems like you understood and were understood yourself! How cool is that?

Hopefully this person was trying to be helpful and just came across in the wrong way or was tired or had a bad day - we can all be grumpy at times! If not, then you don’t need to put up with someone who knocks your confidence - theres a whole bunch of lovely people on this forum, and out there in “the wild”.

Charlie’s put it really well - so does Nick, in this video (warning: a couple of earthy words, but the point still stands): 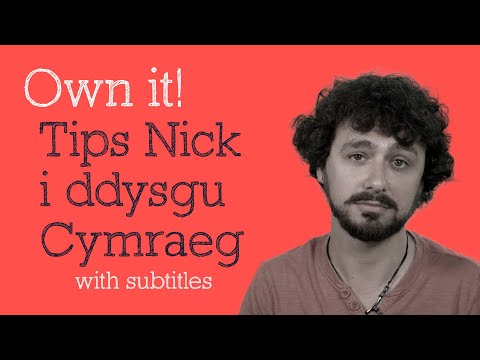 Seriously though, you’re not stupid, not in the slightest - what you’re doing is admirable! To learn and start to communicate in a new language (especially if you’re an adult, especially if you’re shy) is more nerve-wracking than it’s given credit for, even if you’re usually a confident person. Everyone’s journey is different. I think sometimes that’s easy for someone (like your work-friend) to lose sight of, if they learned a long while ago, or if they found they just ‘had the knack for it’. If this becomes a habit with her though, Charlie’s right - you don’t have to put up with it.

Thanks, and sorry for the delay in replying.

Yes, exactly. I mishear lots of things in my native language every day and I employ the same technique- guessing!

I do think that person at work was trying to be helpful- she caught me at a bad time. You’re right- I’ve since left that Reddit sub and the Discord server- there were way too many people who got a kick out of humiliating learners on there.

Thanks again for your encouraging words. I try to tell myself how far I’ve come when I first started.

Thank you- I am not usually a fan of language learning videos but that one is thankfullly cliche-free! More people need to see that- learners and native speakers! Especially the last bit was nice to hear- when you’re not from Wales, it can sometimes feel like a secret language that you’re not really allowed to speak.

Haven’t been on SSiW much as the lessons are really fast for me but the people on the forums seem nice and I haven’t come across anyone on an ego-trip here.

Thanks for the message, I really appreciate the support and apologies for the delay in replying.

I never let someone discourage me. If they correct me I say diolch, then ask, in saesnig if they dallt and if they say yes, I say that’s a step in the right direction

Answers to ‘wedi’ questions vary anyway. If you’re being northern, and someone says “Wyt ti wedi clywed y newyddion?” you can answer ‘Do/Naddo’.

If you’re being southern, then the answer is ‘Ydw/nac ydw’. So if you pick the wrong one for the area, just say you’re getting in touch with your inner gog/hwntw.

Anyway, much support to you. The discord/reddit sounds horrible.

Firstly, can I just say how very impressed I am that you are managing to hold conversations with anyone!
As a complete beginner, halfway through week three, I am in awe of anyone who would reach the stage you are. Please don’t feel discouraged as you have shown me that if I keep at this I may well also be able to hold A short conversation with someone in Welsh one day! Well done and definitely keep it up!

After a couple of months I was able to hold a slow, stilted conversation with my Welsh-speaking partner. It was difficult and probably quite a dull conversation

But you’ll get there.