I like the title. Sounds like something cutting out useless theory, straight to what you need…to go around efficiently! 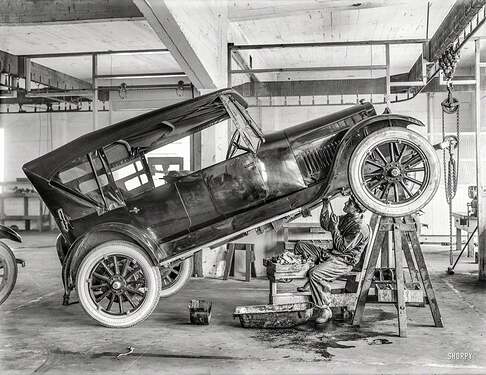 Sorry - I’ve missed this topic up to now Thanks for mentioning it in the weekly email, Catrin. Just a little hobby-horse of mine: will there be any focus on colloquial or dialectal forms? I mean those features of Welsh as she is truly spoke by the masses and which make it so difficult for us learners to really blend in. Is there any prospect of a book on the bratiaith -if it really exists?

I find Gareth is very good at including notes on colloquial/dialectal forms in his grammar books anyway (compared to other grammar books I’ve come across which now gather dust on my shelf!), so I’m sure this won’t be an exception - in fact I’ve got a feeling that it could well contain more than usual going by the hints here and there in his posts in general across the forum

.
There is a sneak peek at the contents list/index here:
More SSiW mutational mirth after this short commercial break

Thanks for mentioning it in the weekly email, Catrin.

Is there any prospect of a book on the bratiaith

Yr iaith lafar is what you mean, I think.

I love that sentence - can you contact @beca-brown and do a full sgwrs for us in bratiaith, please?

Uhm…this sounds quite like my current Welsh language style…

I’m sure you are being unduly hard on yourself there, Gisella

Yes, actually Gareth has (in book form) been my friend and ally for the past ten years or so, and his book has been really useful in sorting out some of the confusion for me around having some South Walian and some North Walian background in the language. So… I’m really looking forward to the new book. Many thanks for the link to the sneak peek, Siaron!

I know, I know! In the end getting to grips with the spoken language is a bit like coming to terms with death – it’s something you have to do for yourself.
And yes, Beca has done a brilliant job in at least making it that much easier (the spoken language that is, not death!). And yes, I’ve been wasting the last ten years planting trees and growing stunted vegetables and otherwise wrecking the planet instead of going down the pub and talking bolycs till I can make out every last phrase and hiccup. (Which is impossible, of course).
I’m reminded of someone who ‘unrolled himself’ – as he wrote it - on an EFL course in Manchester and took me to task for not giving the students the local version of words such as ‘butter’, which he’d discovered was normally pronounced “bw’a”. I didn’t cut him a lot of slack at the time, but I’m getting my come-uppance now. Yes, how else other than by just listening and listening do you get to recognise the tiny differences of stress and intonation that converts the spoken “I’d know” into “I don’t know”? Actually, no-one else can do it for you. But there may be some short-cuts…

I think I mean both. I don’t know to what extent they’ve been properly studied, but I haven’t found a great deal on the internet under ‘bratiaeth’. I presume bratiaith is built on “brad”, as in the Llyfrau Gleision, which isn’t very nice, and I agree it’s obviously not a good idea to label people who have only a limited but nonetheless real hold on the language, especially when we’re aiming for a million speakers of the language.
But even native speakers seem to be very unconfident of their Welsh, like one of my neighbours here in Nefyn who in all his 80 years has rarely been outside Pen Llyn, let alone Wales, but prefers to speak English to me, supposedly so that he can improve his English, which can be pretty halting; yet when he speaks Welsh he tends to mumble as if unsure whether he’s making mistakes or not, and apologises for the quality of his language!
I’ve certainly heard stuff very like your example of ‘bratiaeth’ on S4C, only from the sun-blessed South, I think. I wonder if you have any suggestions for studies that have been done on the vernacular, whether it could be labelled ‘bratiaeth’ or the iaith lafar. I did see Ifor ap Glyn’s excellent series on the iaith lafar on S4C a while back, but I’d like to be able to find a more serious and in-depth study if there’s one available. I have to admit, though, that I haven’t yet had the gumption to leave my adopted milltir sgwar and go rummaging among the files in Bangor. I bought a piece of cheap Hong Kong spyware a few years ago in order to get someone to record everything they said for a day, but I haven’t been able to persuade anyone to wear it, even for a bribe, and it seems a bit unethical to gather data without telling people.

any suggestions for studies that have been done on the vernacular,

The classic, and a wonderful piece of linguistic fieldwork, is A Welsh Vocabulary of the Bangor District by the Englishman Osbert Fynes-Clinton, published over a hundred years ago but still an excellent snapshot of NWelsh speech. Hefty book sometimes (rarely!) found in second-hand bookshops, but also available now in facsimile edition (2 vols) from Llanerch. 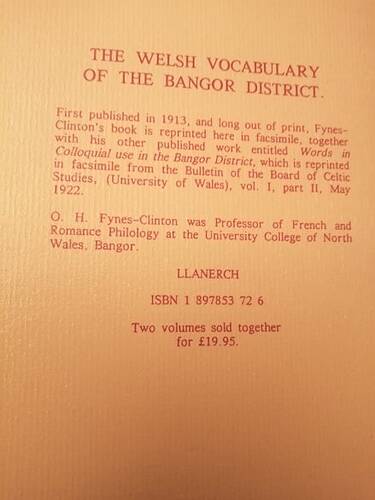 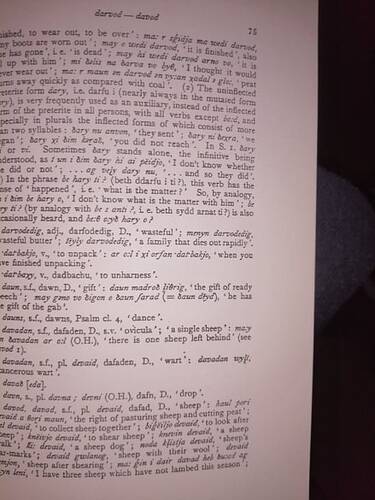