Good Problem to have? 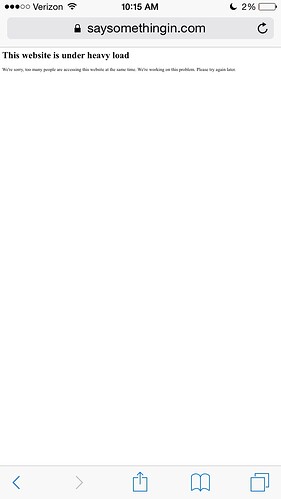 Got it on my browser too - I’m guessing the site is getting somewhat more popular than Aran may have anticipated ;).

@tatjana I have an iPhone but the problem seems to be gone now!

Fine. Probably the site stopped to be overpopular again.

Aran probably left a heavy advanced Welsh grammar for serious obsessives book on the server, I got this message too!

Now on a sirious note:

Everything is happening so slow on the net today. Obviously this has something to do with magnetic storm which hit Earth some days ago. Just approximately half an hour ago I’ve tried to have Skype session with @brigitte and half of the conversation we have problems hearing each-other and we even don’t have video chat switched on. Usually we can hear each-other without any problems.

Yesterday I’ve had Skype conversation with @Ben and had more or less similar problems until he switched computers.

The SSi main site was down for me on the computer for some time also however I didn’t try it on tablet and I also didn’t use apps today.

We can only hope tomorrow will be better.

Well I was out all day yesterday and not using my computer.

When I tried to use it today, I found it had upgraded itself to Windows 10! Against my wishes, and certainly without my permission. I was not best pleased, to say the least. I have now managed to get it back to W7, and have now changed the Windows update settings that I think allowed this to happen.

(My Wife is not so lucky…I think the same attempted update failed, and we are both currently trying to pick up the pieces. Thanks Microsoft…

…anyway, I’m wondering if this happened to a lot of people yesterday, and the net is now busy with people trying to recover from the situation one way or another, and/or venting their spleen with Microsoft…

It turned on this morining to me but fortunately it asked me for permition. Since I don’t want to upgrade for verious of reasons I cancelled the upgrade so obviously it happens. My son told me a week or so ago that those who have W8 or W8.1 the software which constantly buggs you to upgrade is inplemented into the system already so you might want to be extra careful and read what writes in the window when it appears before clicking anything.

I presume if you have W7 @mikeellwood, they just don’t ask anymore if you’re willing to update or not but just do so by default. I’m happy you could reverse the process though.

Yes, this was W7. It’s not that I’m a Luddite (although I am!) - I’m seriously concerned that my old machine won’t have the resources to run W10 properly. And in any case, it simply should not happen without warning, and without the option of saying “no”. With some warning, at least one could have taken backups, etc.

Totally agree on this one.

I don’t have this problem with Linux. However my father’s laptop, attempted the update recently, so I was called in to reverse the process, he is now back to Windows 8. Micros**t just have zero consideration for their ‘customers’ and are still trying to force the world to use their bobbins operating systems, unfortunately such a business model has worked well for them for the last twenty years. You can stop this by changing your update settings, by switching automatic updates off, my father has not been bothered since. I also deleted, the file that runs the update, once you delete this I think you are fine, I thinks it’s called “KB3035583”, delete this and you are free of constantly being asked.

I have on old underpowered netbook that I use as a document viewer and for taking notes in meetings and it was given a whole new lease of life by upgrading it to Windows 10.

With automatic updates switched off your machine will miss out on security updates though.

Here’s a way to disable the Windows 10 auto update, but leave other updates intact

You can still manually update security and other updates, just check what they are first.

I have on old underpowered netbook that I use as a document viewer and for taking notes in meetings and it was given a whole new lease of life by upgrading it to Windows 10.

I’m not saying W10 is a bad thing … I’ve heard good reports of it. I would just like to choose when.

However, it’s interesting that it ran ok on an older machine. In the past, newer versions of Windows in general used more resources. So that is useful information to have.

The usual problem however is not necessarily the operating system itself, but whether whatever else you have installed will still run with the new version ok. That has certainly not always been the case in the past.

However, it’s interesting that it ran ok on an older machine. In the past, newer versions of Windows in general used more resources. So that is useful information to have.

Yeah. I thought the machine was a lost cause, but had heard that Win10 was a bit less bloated than the previous versions of Windows (been going downhill since Win2000 in my opinion), so I had nothing to loose and it seems to have worked out OK. Boot time is twice as long as on Win7, but that’s Ok as long as you remember when it’s best to switch off and when it’s best to sleep.

More then program/operating system itself I have concerns of the amount of information the system “takes” from your computer. I’ve read there’s almost no privacy anymore and besides … if you have anything illegal on your PC, being it pice of music, software or anything else, it’d become useless as the system is designed (again of what I’ve read) to detech and bolck every single non-licensed content. I don’t hold much “piracy” on my PC, but am fearing that software of “small and unimportant” companies would be recognized as illegal dna blocked for this reason especially if they’re old enough to be “forgotten” but they might still work well with W10 … System itself was never particular problem to me apart from installing all software (and I have million of animating, 3D graphic, music and video software I use) …