I learned to drive in 1962 in a mini which didn’t have synchromesh between bottom and second gear. It was a nightmare - I failed my test. It was only later that i became slick at double de-clutching.

I drove a mini as my first car with no syncromesh between 1st and 2nd either. I had to go up a steep hill to work with traffic lights at the top. I always hoped for a green light and no traffic so I could get a good run up. If I had to slow down too much, changing down to 1st meant coming to a complete halt and, with a dodgy handbrake, starting up again was a nightmare! I’m glad those days are behind me!

BTW @JohnYoung, I’ve heard that double de-clutching where you have synchromesh can be harmful. You might like to take expert advice.

I have sometimes suspected this (being a closet double-declutcher myself quite a lot of the time). Or at least that it doubles clutch-wear…

As far as I can see, the following article (FWIW) does not indicate that it does any harm: 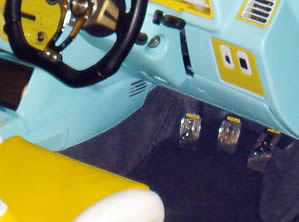 he double de-clutch is best performed using the left pedal! To change gear you depress the clutch, move into neutral, release the clutch match engine speed, depress the clutch and engage the next gear. So how does this method work and is it better...

One situation where I’ve found it definitely helpful (this on a 2008 Fiesta) is when manoeuvring for parking, and changing between forward gear and reverse. I’ve often found that if I don’t double-declutch, engaging reverse is a distinctly rough/graunching.affair (may indicate some sort of existing wear, I suppose, although the car is in reasonable nick for its age … touching wood, of course.

Until earlier this year, I had driven a manual transmission car since I began driving (fifty years ago). Once I got “up to speed” (so to speak) I was quite profficient and could do pretty much anything necessary in driving. I even got a compliment once from a friend riding with me when the clutch didn’t quite disengage properly and I did have to double-clutch. I don’t think he expected me to be able to do something like that (me being female and all). But that was rarely necessary. I would still be driving a stick if my new car had been available with one, but it has all these safety features (which are good!) but which require the automatic transmission. >sigh<

All the female visitors I had from the US in my active Trek fandom days could only drive automatics and, on the first occasion that one group came, they had not thought to specify an automatic when booking their hire car. They were stuck with gears and only one of them (male) could drive it! It is nice to know at least some female Americans can work, not just gears, but double-de clutching! Mind, if we are all going to have electric cars in future to save the environment, I suspect gears are not involved with those! I have always been pro-hydrogen power, but no mention of that in Government policy plans!

I have always been pro-hydrogen power, but no mention of that in Government policy plans!

I don’t claim to be an expert (of course), but from what I hear, hydrogen could be a lot more practical than electric cars for everyone. Lots of problems about the latter, and I suspect the govt. announcement about that was mainly to distract people from its other problems, knowing that they wouldn’t be around to have to put it into practice, years down the line. I seem to remember that Germany has had experimental hydrogen-powered buses for quite a few years, although I don’t know how the project has developed.

A fuel cell bus is a bus that uses a hydrogen fuel cell as its power source for electrically driven wheels, sometimes augmented in a hybrid fashion with batteries or a supercapacitor. Several companies are conducting hydrogen fuel cell research and practical fuel cell bus trials. These include: There are also fuel cell powered buses currently active or in production, such as a fleet of Thor buses with UTC Power fuel cells in California, operated by SunLine Transit Agency. Hydrogen-powered fue...

on the island of Unst in the Shetlands, there is hydrogen power and has been for some time. I got quite excited when it started, because I had been going on about using solar, wind and wave power to electrolyse sea water to get hydrogen to power vehicles with nice clean exhaust (water) that would just clean the roads as they went! I had been muttering about this as an answer to global warming and pollution for years, but it never seemed to be taken up outside Unst! Aberdeen is a great step up!

Bit of a plug here for a company in my town:

Our purpose is “To pursue, systematically, the elimination of the environmental impact of personal transport” by designing a Hydrogen Eco Car & Eco Company