Not sure if this needs to go in the quick answers thread, or if this has even been asked before, but with Euro 2016 (for which Wales has qualified for the first time in what seems forever) around the corner, are there plans to do a football related lesson similar to the rugby one?

An eminently reasonable suggestion. However, given Aran and Iestyn’s extreme bias towards the game they play in heaven, I would rate your chances somewhere between Buckley’s and none.

Just an observation… Football commentary yn gymraeg always seems to me to be one of the easiest things to follow on the radio. There’s only a limited number of things that happen in the game so the vocab is fairly straightforward, and the commentators don’t generally have time to think of massively complicated things to say. Only snag for me is that I know nothing at all about footballers (other than that Garry Monk spends his week in Pobol y Cwm and his weekends in Swansea), so I can never work out which team is doing well and which is doing badly.

Good idea, here’s a start with apologies for poor grammar and spelling

It’s a ‘should do’, certainly. And with the SSiBorg coming along nicely, it’s not entirely impossible…

As soon as I read this, I got that song stuck in my head: “Dwi methu stopio siarad am bel-droed!”

This is from the BBC news site. It’s French, but spelt using Welsh phonics. It had my head spinning!

I know nothing about the strange game with round ball, but I know it was 5 years after Cymru beat the All Blacks that they did OK at pel droed, so:-

Lwc dda Cymru!!!
Later -
Yn dda iawn bechyn!!!
I knew I didn’t understand! Do I gather that a yellow card doesn’t mean you go off to a sin bin?? So what do you lose by the card???
Anyway, our boys won and thats what matters!!

a yellow card is the first and only official warning, the next one is a red card which removes you from the rest of the game without being replaced - in competitions, you are often out for one or more further games as well

Good game. Some ‘interesting’ refereeing decisions. And a fantastic crowd! I may have been singing along with them with Calon Lan at one point haha. Well worth being up in the middle of the night for.

It is frustrating not knowing if the commentator is right when he criticises the Ref!! Also, watching the ball seemingly going round and about at random and having a notion that the guys are doing something clever, but not knowng what!!
To @louis Diolch!! Now I understand! I must have got confused because I thought one Slovakian got 2 and stayed on!!!
By the end of the Competition, I may have a slightly better grasp!!

Yes have no doubt that would be. Discussing the facts around rules commentators are usually spot on. I often find their opinions regarding how they play out, differ from mine. If you had the same 2 I had, they were terrible and you should forget them. Any further questions regarding the rules, let me know and I will help you out.

These pages are from Dylan Ebenezer’s book Gorau Chwarae Cydchwarae in the Stori Sydyn series, which I would recommend.
[People following the no reading/no writing advice, look away now!] 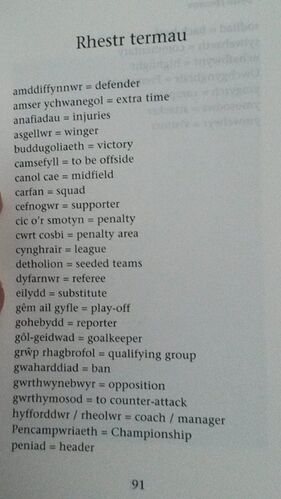 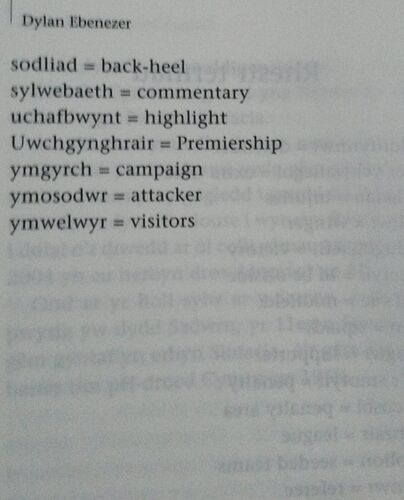 I will help you out.

I read @robbruce’s glossary and found I didn’t understand some of the English! Well, I understand ‘offside’ in rugby, but it seems totally different in pel droed! And what is ‘back-heel’?
p.s. I do hope no Welsh fans get duffed up by Russians, who seem to have been sent by the KGB to cause mayhem!

Here (at the start of the clip) is a Gareth Bale back-heel that sets Hal Robson-Kanu free to score against Cyprus. Basically, Bale is facing the wrong way and being closed down by two opposition midfielders with no opportunity to take control of the ball and turn, so he flicks the ball on with his heel, the back-heel in question, and completely opens up the attacking half of the field for Robson-Kanu. The skill, awareness and anticipation in this is absolutely world class.

Just read interview of one of a Russians who ‘flew there just for the fight then flew straight home’.

Offside- simple version, when the ball is kicked, there must be two of the defending team between yourself and the goal you are attacking. And you can only be offside in the attacking half.

Russians who 'flew there just for the fight

On TV this a.m. was a Russian MP who said he couldn’t see what was wrong with fans fighting and “Well done our boys!”. He didn’t seem to notice the women and kids in the crowd being chased by his thugs!!
This a.m. I watched our rugby team getting thoroughly defeated by the Chiefs in a mid-week game in New Zealand. (We lost 40 - 7!!!)
I saw a huge number of kids in the crowd and loads of women and men of all ages. A comment from someone in France, saying that no way would he take his son to a Euro game really underlined the difference!!
Added after England win (sob

)
Do we have to beat Russia now? Would that get us through?
p,s, The front of the sweater I wore to watch: 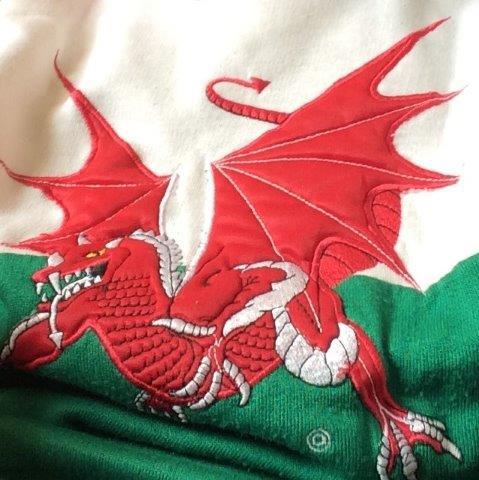 Dw’i’n hapus iawn iawn!!!
Cymru 3 - Russia 0
But… @MickDavies; @louis…?? Can you explain…the numbers the players wear seem to have nothing to do with the positions they play, except maybe the Goalkeeper is 1 (yes/no
Also, according to BBC, Winner Group B (Wales) have to play on Saturday. Runners up will have a longer rest!! How come???
Meanwhile…