…whence mediaeval maps usually having East at the top, which I suspect is the reason why the GPC gives “de = right” and “de= South” as two different senses of the same word. (Also why Tolkien had dwarf maps with East at the top.) So to ‘orient’ oneself is also to figure out which way up you should be holding the map. AFAIK ‘orientate’ od a back-formation from ‘orientation’. 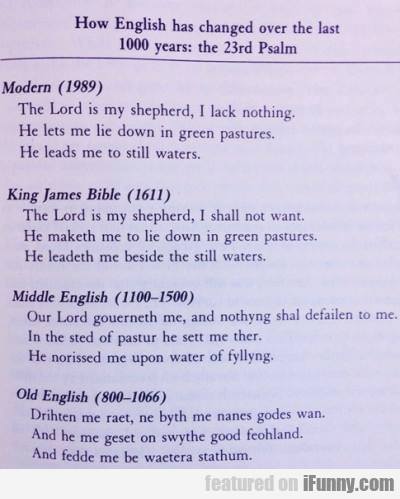 Here’s one to finish off the year. Looking at “Byth” in the Old English. OK, so the two Older versions will be different translations from the two newer ones, but I can’t quite match Byth with any English word except perhaps “beon” (to be). I was just thinking how much “ne byth me” looks like “na b/fydd(a m)i” for I shall not (want).

Is there any chance that bits of the Britonic language were still clinging on at this time, post Roman Britain?

I’m probably wrong, but I can take it

Wiktionary says that the third person singular, present tense of bēon is biþ, which looks pretty much like byth to me if you don’t assume a consistent standard spelling.

So perhaps ne byth me nanes godes wan is "not is to-me nothing good wanting*.