I was requested to provide an update in another thread but didn’t want to derail that thread too much.

I had an old one of these in the old forum where it was pretty normal.
http://old.saysomethingin.com/welsh/viewtopic.php?f=32&t=5408

So I havent been here for quite a while. I was having private tuition on skype until my tutor got ill then never seemed to sttart back working. I was then doing private lessons with the president of the local welsh society in the newcastle and hunter region but then she too took a break from that. Then I just ran out of free time and energy to further my welsh much. I have more just been cementing my basics i guess.

I was pregnant last time I posted and my daughter turned 2 in march. I have been speaking pretty much just welsh to her since birth with the exception when i am too tired or too angry. There was some good chunks of that with the ongoing health problems I have had post pregnancy. The thyroid issue was managed poorly by doctors and i had a pretty rough time with side effects which made me feel unsafe around my daughter. I did get changed to a more suitable medication for me and once i found a doctor who would dose me properly i started feeling more functional. I had surgery to remove a large mass and half of my thyroid last month and it and the hospital antibiotics have helped so much. I now don’t feel just broken anymore, but i do feel like 18 months of feeling good and having the best energy for my daughter was stolen from me.

I have recently had a surge to move my welsh forward again as my daughter is catching up and overtaking me in some areas. She only watches welsh language kids programs, has welsh kids books (about 60 of them) and plays with welsh aps. She makes full sentences occasionally complex ones and has started conjugating verbs and throwing in southie forms and orders she is getting from the shows. She says a few things in english, but not much, and rarely to me. My husband is more concerned about this than I am. I had kinda thought more of my family would be more involved with their declared excitement leading up to her birth, and she would get the english from them. but most of my family’s total visits can be counted on fingers … all together. I still speak mostly in english to my husband though so she does hear and seems to understand it.

Sometimes i think my relatively simple welsh has made it easier for her to pick up language, she can counto to 20, knows all colours, shapes including polygons, food, plants, animals, weather, verbs etc i guess she has around 2000 words. She had a bit more than 300 at 18 months, I did up a list to check the total.

So I have startedpracticing with others and some first language folks on hellotalk and just enrolled for Cada Dìa Welsh which kicks in properly in July. It is online and daily sessions but they will be at 1:30am here so i will be on recorded watching i expect mostly. It is free as it is the pilot funded by welsh university.

ok half my post vanished when i tried to upload pictures, which sucks as typing on my phone is slow and tedious.

I have recently been re-elected secretary of the above mentioned welsh society. I dosome welsh writing in newsletters for that. I made my daughter a welsh ladies outfit, including making the hat, for the st david’s day event this year. I also roped my father in law who is a SSIW person in to be guest speaker at the event. 2 days after arriving in Australia for the first time.

My daughter Seren has been on the cyw birthday listings on S4C both years and this year was the featured one on the penblwydd pwy cartoon. Her birthday cake I made with the help of her visiting grandfather was a 3d Tŷ cyw complete with fondant characters. 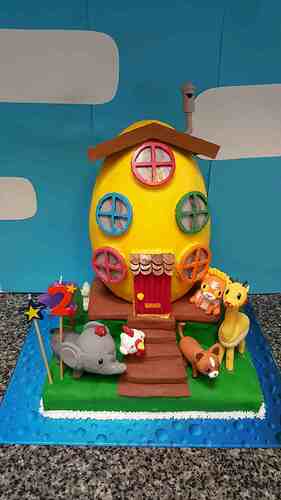 This is so great!! Great job! I’m proud of you for making the push to improve your Welsh again, and I’m very impressed that you’ve been teaching your daughter right off the bat. Makes my heart swell.

Great pictures! And what a head-start you’re giving Seren. She’ll get the English in no time flat if she goes to playgroups or school in due course…

well she has as much english as kids her age, but they have no other language. beats me how there is good communication when they other kids only use one or occaionally 2 words at a time.
I know comparing developmental rates is poor form but kids just grunting and pointing and Seren is busy telling me about the shape,size and colour of the object.
Sometimes the welsh first makes me feel a bit down personally as no one else can tell how great she is doing. When people talk at her in english and i explain she doesnt really speak in english, they just laugh and say yes toddlers have a language of their own, and im like no we speak welsh at home, and she speaks very well for her age.

she does mix some sounds though. she can say sbectol but always mixes it to bsectol haul. she adds a sh sound to the end of words anding with r so oer becomes oersh.

I know comparing developmental rates is poor form but kids just grunting and pointing and Seren is busy telling me about the shape,size and colour of the object.

I saw a study somewhere that said that by the time a child first goes to school (in a context where that is about 4ish) the difference in the amount of words they’d heard between children from a home where they regularly talked to their adults and those who didn’t get given much conversation was, quite literally, into the millions (of word instances, not separate words).

You can see how that kind of extra exposure triggers some pretty important neurological responses - and it seems to feed with depressing regularity into later patterns of achievement (depressing for the kids who don’t have much conversation going on - fine for kids like Seren, of course!).

Hi @rhywun, great to see you’re back on the forum!

It’s a very impressive story - I didn’t realise you were quite that serious about the Welsh project! Dal ati!

Yep it is what i feel i need to do to help Seren have the best developmental advantages and be able to access some of the culture of her ancestors 8f she wants to be able to.

I am totally in awe of your talent! Not only can you program a web site to display not one, but a lot of different dancing dragons, but you can sew and produce an incredibly good national costume, but you can also not just make cakes, but an ovoid cake with all the added decorations, and all that after the most horrendous mess of a misdiagnosis or mistreatment or both!
If I still had a hat, I’d have taken it off to you!!
Oh. and on top of all that you have learned to speak far better Cymraeg than I do!!
p.s. Had you noticed the petition for people from outside Wales to ask for decent funding for S4C?

Non-residents of Wales ask for S4C funding to be maintained

We, the undersigned, are all learning or have learned the Welsh language. We all live…


Recently, the Welsh Affairs Select Committee report was published and I’ve put a quote in the thread ‘Submitting the petition update’ (Sorry I don’t know how to put links to topic threads!!)
1 Like
pete June 17, 2016, 10:20am #10

Amazing. Knowing a few first language Welsh speakers I think this is absolutely the right thing to do. Mostoff the people I know who were brought up in welsh speaking homes spoke little no English until they went to school and of course they speak perfect English now.

Yeh the dragons arent programmed. I drew them, frame by frame and created the files

I was aware, growing up, that I had gained from so much of my Mam’s undivided attention, together with lots of time spent with Taid and even my Grandmother whose attention came with strings. I owed all this to WW2, which had taken my Dad off to north Africa and then the far east and left my Mam living with her parents in a home where her presence in the kitchen was discouraged!!
My contemporaries were not all in this situation. Some were evacuated with both good and terrible experiences, some were in big families with a busy and frightened mother, some were with a widowed Mam, but in a home with no other adult. My home lacked books except those bought for me by my Mam.
As an only child, I was assured of more attention than most. It isn’t fair on all those who lose out, but now, isn’t Cylch supposed to compensate?

I’m sure it helps, but I’m not sure it could ever entirely bridge the gap…

I suppose the problem is that all kids go to Cylch, or mainly those whose parents do interact with them… i.e. the ones who really need it tend to be the ones who miss out!! Or all go, but the advantage stays because all are gaining and that is on top of what they start with!! I see no answer!!