I have been watching this program on S4C. There was a bit last year, but this is much better, although a geneticist might think some of it a bit simplistic!! It was good to find they are now doing work with mitochondrial DNA as well as Y chromosomes, and that we females tend to have been in Britain longer… not surprising, I suppose…men arrive, local females have their babies, willingly or otherwise!! But the definite difference between Wales and England and gogledd and de… was good to see!
I don’t want to spoil it for anyone, but there is a surprise for an ex-rugby International!!

I read about this. It’s all very interesting, along with the Ancestry DNA. Just rather expensive. maybe one day…

What you need is for the group to do a survey of people with Welsh ancestry living outside Wales and ask for volunteers!! Then you can get it done free!!!

That could work. I love free stuff!!! haha 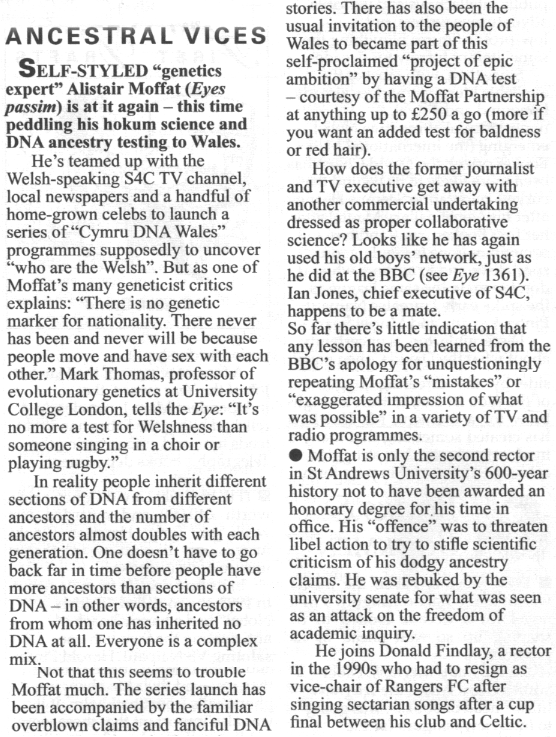 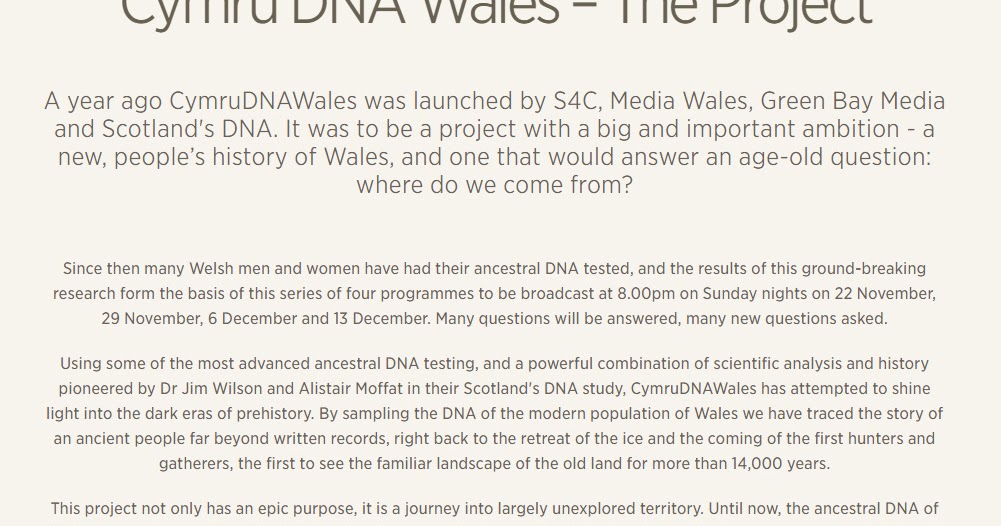 My review of DNA Cymru Part 2 - the controversy continues

I wrote earlier on this year about the controversy over the DNA Cymru series on the Welsh-language TV channel S4C. The first programme in t...

Although the programme was better than the previous one, this is mainly
because they incorporated highly respected scientists like Dan Bradley
and Peter Donnelly. It is still a big disappointment to see a public
service broadcaster being used to promote a commercial genetic ancestry
company in the guise of a research project, and to see speculative
stories mixed up in such a misleading way with serious science.

I was trying not to ignore this to prevent my blood pressure from going through the roof, so good to see someone else putting the relevant facts concerning the “history” and “science” about this series.

After watching “y Cymro a laddodd Richard iii” recently, a good and interesting history programme, it was really depressing to see this nonsense rearing it’s ugly head again. If S4C is a national institution which reflects Wales, this makes me ashamed to be Welsh.

It certainly gives ammunition to people who claim that S4C shows bad programmes more concerned with using public money to get jobs for the boys (and advertising for friends) than in benefiting the nation.

This is not to criticise anyone who finds it entertaining, of course. I’m sure it tells some great stories!

We just all need to take both the science and the history with a rather large pinshen of this: 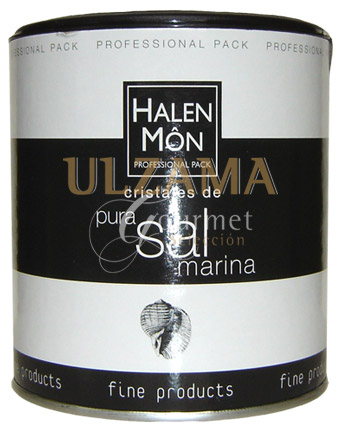 Much salt, I agree, with or after the first program in March. I don’t remember now why, but I do know I was disappointed and found it very unscientific. I was much happier with these, as seen so far, because they were following the female line for which there is good science which was used when following back to the ‘eve’ who first left Africa and tracing the subsequent migrations.
I didn’t know about Moffat and this company mentioned. I did presume the slight variations in the y-chromosome were similar to the traceable features of the mitochondrial DNA which enabled the migrations to be followed. I will re-watch when I have time and will be super-critical of the following programs, but I will not dismiss it all because some of it is dodgy science.
(To be honest, I developed a jaundiced view of much biological ‘science’ as a result of years with non-numerate biologists!!

I have no knowledge of this specific programme or the people behind it, and Rob is right to be sceptical if doubts have already been raised about this particular “researcher”.

However, I don’t think one should necessarily reject all genetic/historical/archeological research, just because some people are giving it a bad name.

For example, the books by Professor Bryan Sykes, e.g. “Blood of the Isles”, are quite fascinating, and do, I think, have respectable science behind them, even if not everyone necessarily agrees with his interpretations. (You will always get disagreements among experts and this is probably as it should be, as nothing should be accepted without question).

I first got interested in this sort of thing when I wondered what actually happened to the “ancient Britons” who used to inhabit England before the invasions by Romans, Angles, Saxons, Jutes, Vikings, and Normans. The fairly simplistic picture we were taught at school was that they were all driven to the “Celtic fringes” of the country. But it seems it was nowhere near as simple as that, and probably a large number of them remained where they were, and probably intermarried with the invaders, such that many of us born in England quite possibly have some of the genes from the original “Ancient British” people, mixed in with those of later invaders.

I’m not much of a scientist myself, but I did some editorial work on a book by Steven Oppenheimer about tracing humans’ early migration through mitochondrial DNA, and that seemed really interesting to me. Can anyone more clued up tell me whether that sort of thing is held in good regard?

I don’t thing anyone is or has suggested that all genetic or other historical research should be rejected because of Alistair Moffat or Ian Jones.

If S4C is to be a well-thought of channel, worthy of our support, things such as this must be condemned.

I’m certainly not more clued up than you! But an interesting thread on History where Oppenheimer (amongst many, many others) is discussed on the old forum here-

[edit- sorry, linked to that thread pretty much randomly. Oppenheimer mostly mentioned near the beginning, on page 2 of that thread.]

John ( @ramblingjohn ) has put a good simple explanation in the ‘What’s outside’ thread. If you click on the ‘search’ button and type ‘mito’ you’ll see it come up at once, top of the list!!
I used to work with some of those involved in the very early days of the human genome project, so I’ve always been interested and knew quite a lot about following human spread from Africa using mitochondria… I didn’t know anything about following y chromosomal difference or this company and I still haven’t picked up on S4C plugging it!!
I certainly do not like pseudo-science one bit or folk who cling to a theory despite the evidence!!
I will never forget when we submitted a paper in the mid-sixties when young and innocent, in which we spent a lot of time explaining our efforts to repeat another scientist’s results, but failed. We then presented our results. We received back, to paraphrase, “This scientist is quite likely to have made up his findings. There is no need to do more than simply mention that your results are not consistent with his. Yours are clearly correct. We will publish your paper with that small alteration.” We were horrified! Fancy having a reputation like that!! we later found that he was by no means unique!

That is a great story/explanation why we should always be prepared to question what we have been told (in a nice way). It looks like you may be better qualified than me to write on this subject, da iawn.

Any significant genetic traces relate back to the post ice age neolithic settlers (ginger gene carriers).- They are shared by most people on this island.

Most English people today will have ancestors who spoke ‘forms’ of Old Welsh if we go back far enough.

Biggest changes have always been cultural ones

Studied this at uni…this is an incredibly simplistic summary…but I have to sleep ;). Nos da!

Know nothing about this Moffatt and his antics, but regarding european ancestry, these articles I find very interesting and plausible:
http://www.hhmi.org/news/modern-europeans-descended-three-groups-ancestors and more recent findings here: http://www.bbc.com/news/science-environment-31695214

The articles posit that the first farmers only have two of the three mooted groups of ancestors (and imply that the Basques are remnants of these farmers), and that a third group mixed in about 4500 years ago through a “massive migration”. I am very curious how this research can shed light on the history and growth of Stonehenge and similar edifices whose use started declining about 4000 years ago http://www.livescience.com/22427-stonehenge-facts.html -

Studied this at uni.

When you have time, do please tell us more, as you are clearly better qualified than I am!
Let’s face it, most of us are descended from a mix of those who crossed into these islands as the ice retreated and were stuck here, together with later groups willing to travel by sea!! We know that some of the former were, in terms of tools, Mesolithic, but I presume anyone willing to travel would have to make the best possible use of what flint they could carry, as they would have no idea when they might find more. Later groups using bronze may well have travelled in search of tin and copper ores.

I have just started trying to read Hanes Cymru by John Davies (slow going, as I’m sure you can imagine!) This is what he discusses at the beginning of the book.