Could we have a thread on Welsh Customs?

That’s fascinating - especially for someone living right in the region it mainly focuses on! Diolch yn fawr iawn!

at the end of the eighties

I got my cottage in '87 and from thenceforth commuted at weekends and holidays from London until '91 when I early retired and could live where I really wanted to!!
You obviously were not one of the students on the steps who my little bitch ran back to from the beach. “I am a
abandoned little starving stray!” she told them. Unfortunately for her, she looked like a rather elegant and well fed Cavalier and they soon heard me calling and calling and getting closer. Eventually, I reached them. Tish was still trying to look pathetic and gazing hopefully at their sandwiches. “Remember me?” I asked her. She literally jumped and they all roared with laughter and gave her and Truffle bits of sandwich despite me!!!

That was definitely early 90s.
p.s. what were you studying? We got a lot of geologists looking at strata that tipped different ways with a clearly visible fault line between them.

Heh! Yes, dogs are marvelous at claiming to random strangers that they are mistreated and underfed!
I wasnt a student - it was just before I went to University . I was working as a general dogsbody for the National Trust. Hard work and little money, but worthwhile experience - just a stop gap job though!

Fantastic night of Mari Lwyd coming up in Caerdydd! I went to this one year and it was great. You can be part of the ‘parade’ and follow the Mari Lwyd from pub to pub - loads of fun! 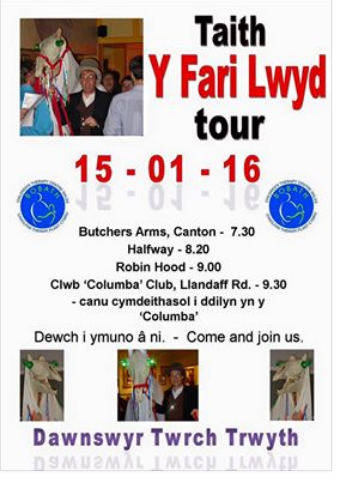 I suspect I am about to be pedantic and a kill-joy and generally ofnadwy, but I tend to see the above as a bit like “Disneyfying” the Mari Lwyd.
A group of friends getting a horse’s skull and going round to the homes of other friends to sing and collect for charity, that’d be great, wonderful, a marvelous revival, but events like the Cardiff one, unless I have a totally wrong view of it, seem too much like Disney!!

It didn’t feel “Disneyfied” at all when I was there, more like a tradition being revived. It was a really cold and wet evening, but they brought a great warm spirit with them, lots of singing and fun, and it felt quite authentic. I don’t have a problem at all recommending it to people.

I went along to a “Family night” in Barry last night where someone brought that actual Mari Lwyd along, and did a very nice talk about it. When someone put it on and went about roaring and opening and shutting the mouth, it really was quite an impressive sight!

The talk was pretty well attended with lots of advanced learners and a few first language speakers, but unfortunately my 9-year-old was the only kid. It was a good job we went, as they had two tables of crafts set out, and she had an absolute field day making a magnificent Mari Lwyd and a Calennig thingy out of an apple and twigs etc. (My only regret was that it was too late to stop and chat to people at the end, as it was already well past bedtime for a school night, and my conscience was herding us home!)

I couldn’t agree more with @Deborah-SSi about this Mari Lwyd that has appeared in Canton, Cardiff. If one were to try to aim for a supposed 100% “authenticity” based on an imagined time when such things were done ‘correctly’, there would hardly be any traditions left in Britain at all, never mind any ‘revivals’. Traditions have always changed, adapted and been ‘revived’ according to changing times.

I was actually largely brought up around Canton - in fact I was born in a house five minutes walk from the Mochyn Du a good many years ago (I am 11 months younger than David Bowie!). I in fact went to Canton High School (now Chapter Arts) and moved with it out to Fairwater. My grandparents were old Kaardiffians going back to the 19th century. The prospect of anything like the Mari Lwyd happening in this (or probably any) part of Cardiff in those days would have been UNTHINKABLE, hardly anyone would have even known what it was. The kids at school used to laugh at anyone who showed any interest in wider Welsh culture.

So I think the appearance of the Mari in Canton is absolutely FANTASTIC - if it can appear here then there are no ‘no-go’ areas in the whole of Wales. Some of the credit is no doubt due to Trac Cymru, who are doing much to spread the tradition of the Mari as an integral part of Welsh cultural life, taking it into schools etc. http://www.trac-cymru.org/en/our-work/mari-lwyd

I would share concerns about ‘Disneyfication’ and trivialisation about much of our public life - one has only to turn on the TV any evening to see that - but this revival and the many others like it that are happening in Wales, as well as their ‘wassailing’ counterparts in England which are now spreading from their southwest redoubt to parts that never had them before, are a welcome antidote to such trivialisation. No two ‘traditions’ will be completely alike, but then they never were, completely, even the first time round.

I apologise. I did realise I was being pedantic. I totally noticed the changes in Cardiff, from disdain to grudging acceptance to enthusiasm for Welsh culture. I have said elsewhere that I was thrilled once, in a Cardiff bookshop to hear a father being proud that his son could understand a storybook in Welsh!! (I am older than David Bowie!!)

A group of friends getting a horse’s skull and going round to the homes of other friends to sing and collect for charity, that’d be great, wonderful, a marvelous revival,

I’m not sure the “for charity” bit would be a marvellous revival!

I popped in today looking for some cultural history on Calan Mai and found the link to the pdf of your nice little paper @AlanP. Diolch! I’m curious if you published it anywhere so that I can properly reference it in the future? Did you by chance ever publish your other thesis? I’d love to see that as well.

Shwmae @chris-aldrich, You’ve reminded me to put the essay up on Academia - I think you’re on there as well - under my full name Alan Robert Phillips. (The references are a bit askew as it was an early essay I did for my MA - but they’re all there.)

My longer thesis on Welsh Harvest Traditions is also accessible on Academia, as it is on the University of Wales Trinity Saint David repository, which to the best of my knowledge is accessible to all:
https://repository.uwtsd.ac.uk/id/eprint/775/1/Phillips,%20Alan%20(2016)%20Cynhaeaf…pdf
Maybe one day I will go back and prepare it for publication in book form, as I’ve been urged to do!

It is also accessible here on the forum:

SSIWer Alan Phillips (@alanphillips) recently gained an MA in Celtic Studies by distance learning with Trinity St David University in Llambed (Lampeter) - Alan lives on the Isle of Wight. He gained a distinction for his dissertation on Welsh Harvest Traditions, bringing together material which had never been done before academically, and is hoping in due course to publish an expanded version with illustrations. Alan recently attended the 5-day Welsh intensive near Llandysul, where Iestyn (voic…

Diolch! This is great, and a few more papers than I was expecting.

While going through this long thread the other day, I also came across a longer video/discussion by an academic/researcher on the Mari Lwyd topic that some may appreciate, particularly if they’re considering revivals of Welsh customs: https://www.youtube.com/watch?v=YU5pk-Hc758

Anyone know where I can find a nice, white horse skull?

Pending local COVID-19 restrictions, I may put some planning into celebrating Mari Lwyd in the Los Angeles area this holiday season?

@chris-aldrich I see from your academia entry that you work as a biomedical engineer and all related disciplines. I assume that you just happen to have a general interest in Welsh culture and tradition?

I don’t think I’ve seen that video on the Mari Lwyd before, and look forward to watching it, diolch. Great idea about celebrating it across the pond, but just to point out that it is of course primarily a midwinter festival rather than a spring/summer one. Though these things do often tend to have a certain licence nowadays - as with the English morris and mummers teams, which one can now come across any time of year.

I’ve seen a fabulous Mari Lwyd created by using a flat pack as a base, then building on it with papier maché. It’s one way to do it.
flat pack mari lwyd – Mari Lwyd

sounds like a fun project, but I couldn’t see any photos of the end product

There’s a photo on this other link: A Flat Pack Mari Lwyd | scribblah

Wow, thats pretty impressive for “flat pack”. A herd of them must have been even more impressive/terrifying. It’s definitely something I want to see one day.
Unfortunately it looks like the link to the flat pack kits is no longer operational

Here it is on the Trac Cymru website: https://trac.cymru/en/about-mari-lwyd/
It says that “Trac Cymru’s ‘fflat-pac’ Mari kit is not currently on sale by post but should be available in time for the 2021/2022 Mari season” - I guess you’d just have to contact them to find out. But it looks as if the accompanying book is for sale, anyway.
The site also has 4 videos on the Mari, including one on how to put the flat pack together (once you’ve got it!).

Da iawn @AlanP! That’s definitely the fflat-pac that my friend used and hers turned out fantastic.