I know the chi vs ti issue has been discussed before, but I’m wondering if anyone could give me a little more nuanced cultural explanation specific to the northwest (Gwynedd especially).

I’ve got a friend from Caernarfon who told me that he uses chi when speaking to his parents or his aunts and uncles, and it got me wondering if that’s just something specific to his family or if that’s the standard?

For added context, I’m fluent in French and always referred to my parents as “tu” (the equivalent of ti), and that seems to be the standard from everything I’ve seen and heard after living two years in the south of France. Also, many students in the primary school I worked in refer to their teachers with the informal form as well, and I think that was because of the relative informality of my region of France (Languedoc, super far from Paris).

And now I’ve just started watching Un Bore Mercher and noticed that the children refer to their parents in the informal, so I’m wondering if it’s more determined by individual families or if it’s something regional?

Also, some older people in Languedoc were offended when I used the formal version with them, even when I had never met them before or was working with them in professional contexts, but then when we communicated in writing it was expected to use the formal version.

Is it best to ask? Start formal and wait for someone to suggest we switch to informal? Is there a way that people normally suggest switching to informal (in French it’s “on peut se tutoyer”)?

Here’s a funny little flowchart that gets circulated regularly in my francophone groups in case you were wondering for French. Anyone fancy making one for Cymraeg? 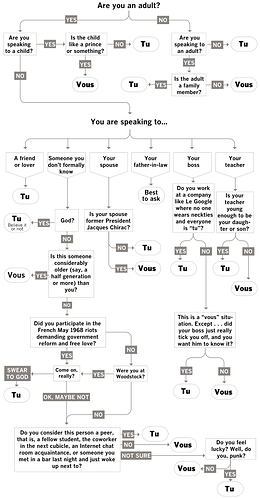 As you say, this has been dicussed a number of times but here are three threads which do address the “cultural nuances”

Ti a Chi, old and new use? Welsh

Helo In the challenges (I’m just reaching the 4th, so excuse me for my very basic questions), I always hear “you” translated as “ti” (french “tu, ton, toi”, depends) ,and not “chi” (french “vous votre”, depends of sentences) I of course understand that it is a choice, since modern english only have the “you”, but what I’ld like to know is if welsh is like breton (well, old people, not new speakers) : Old native breton speakers much more frequently used the “chi” (breton “c’hwi”, french “vous”…

I’ve just completed challenege 20, Level 1, and have recently been tentatively using some of my Welsh in the big, wide world. Should I worry that I’m going to offend people by using ti, when I should be using chi? I’m guessing I’m just using that as an excuse for my nervousness, but I’d fee better knowing for sure if that is a ‘thing’ I should be worried about. Diolch!

For those people that have got onto reading, there’s quite an interesting article here about the use of ti or chi in Welsh: (Tip: if you click on the ‘vocab’ button at the top right-hand corner you’ll see dotted lines appear under some of the words - if you hover your mouse over those words English definitions for them will pop up.)

My Welsh-speaking grandparents told me that in the “olden days” an eminent person or elderly and revered relative might be addressed in the third person! The use of “lei” rather than “tu” in Italian makes me wonder if there is a connection.

Diolch! I did read a little of those threads but I must’ve missed the details (Friday brain!)

My mother (now in her nineties) uses ‘chi’ for everyone - only animals are ‘ti’. And I have heard others of her generation and a bit younger who are similar. She isn’t offended by ti - it just doesn’t come naturally to her.

When she was growing up (Sir Fon and Sir Fflint) most adults used ti to children, but children used chi for adults, even their parents. But her father thought this was condescending to children, so used chi with her as well, even when she was tiny.

My Mother-in-law calls her dad “chi” and I sometimes call her chi but more recently I’ve slipped back into “ti”. When I worked in the NHS I had quite a few Welsh speaking patients (parents and their kids when I worked in paediatrics, and then adults in…well…adult care) and I’d use chi with the adults, always.

I remember asking Iestyn’s daughter what she called her teachers, and they use “ti” with their teachers and parents. So I think, nowadays, you can get away with “ti” anywhere. It’s rare people will be offended by it, especially from a learner, and if they are just smile, apologise and call them chi.

Whilst I was on my first bwtcamp, we went to Sioe Aberteifi, I tried to speak to some of the farmers and decided I’d be really clever and use “chi”. It tripped me up loads. I had to think a lot harder about what I was going to say, I was nervous anyway, and found it made my Welsh a lot clumsier, but that’s all about pushing our boundaries isn’t it?!

From my experience there isn’t really a North/South divide with this.

My Welsh-speaking grandparents told me that in the “olden days” an eminent person or elderly and revered relative might be addressed in the third person! The use of “lei” rather than “tu” in Italian makes me wonder if there is a connection.

I don’t know if there is a connection. However in Italy we have both “lei” and “voi” (in the South) used pretty much the same way.
I plan to use more or less the same guidelines in Wales for chi and ti…I guess it should work!

TBH, I seem to be finding that ti covers most situations for me. Perhaps helped by my years. Perhaps I should use Chi slightly more often with more senior figures but I’ve never yet been corrected on it, even though I have been corrected on minor grammatical or perceived vocabulary inaccuracies, such as using cweit for the wrong type of quite.

Having said that, I have a few friends who outrank me in seniority, and yet still call me Chi. So I feel that I really need to return them the compliment. However, I don’t really want it to sap my confidence in a wrong mutation kinda way.

Since people in Wales are used to English, everybody’s more flexible about it maybe?

Here in Italy it’s not just a matter of age, it’s also context.
You usually use “tu” speaking to a teenager, but in school many teachers use(d) “lei”. Same in institutional, formal contexts o’r strangers also for people much younger than you when you want to sound polite and respectful for example.

While maybe this would sound kinda old fashioned in Wales?

No, I guess that you could be correct. When I said Senior, I was suggesting the seniority of post as well as age. So, I’d say teachers would come into this category. Obviously, I’m no expert, but perhaps in adult language learning, as we are, there might be some flexiblilty with this. Perhaps ease off with time once you get to know your teacher if he/she has a laid back disposition.

By the way, I used Chi (instead of ti) to my slightly older friends today. Again, they didn’t bat an eyelid. So I’m assuming that either is OK with them.