Happy for anyone to start any threads they want (within the ‘play nice’ forum boundaries!) - worst case scenario, not many people comment on them - best case scenario, they turn out to be subjects lots of people want to talk about - so thread-starters are a very valuable part of the community

I did study some Welsh over ten years ago. I did a basic evening class while I lived in London (“Dosbarth Nos” textbook). Later I did three weeks of Summer school and a ten week full-time Wlpan course in North Wales. There is quite a bit of basic Welsh boxed away in my head somewhere but I have not ever practiced it as I decided not to remain in Wales but to move back to Ireland. I tried to learn Irish here (my school Irish was very poor) and did make a lot of progress but I probably have not made enough effort to find places to speak it. My partner grew up in a (supposedly!) Gaeltacht area but he has the usual Irish lack of enthusiasm about speaking Irish

You’d probably enjoy the book ‘Llawlyfr Cerneyeg Canol’ by Henry Lewis. It’s written in Welsh but about Middle Cornish. I found a copy very recently - and can just understand a few bits here and there. It would be interesting to you as it is often clear what the Welsh/Cornish corresponding words are.

Thank you! I will try to find this book.

The verb-noun in Cornish is gallos so the two must by related.

“me a el” is pretty close to one possible SWF spelling in Cornish (me a ell), though most would probably use my a yll, depending on their pronunciation.

@Courtenay: one point to bear in mind with SWF spelling (e.g. in the school dictionary): there was a review of the SWF in 2014 and some small spelling changes were proposed. The online dictionary does reflect this for the most part, but some older printed material may not, e.g. SWF1 nowyth became SWF2 nowydh. (SWF1, SWF2 are my names - I’m not sure whether the original and the post-review version have official names.)

@Dyvrig: the “talking about rather than talking in” is a thing to be tackled indeed. I remember a conversation at a Cornish Language Weekend about “normalising the Cornish language”, in the sense of “making it normal to have a conversation in Cornish”.

Some people only use it at special occasions, such as at meetups, or to speak about Cornish, but the goal should be to use it to speak about everything: tax returns, taking the car in for an inspection, whether you remembered to bring the pint of milk back from the supermarket or pick up the children, what those chaps down in Westminster are doing right or wrong, or what the weather will be like tomorrow.

For example, the Cornish-language news on the radio deliberately do not mention any Cornish cultural events such as the Language Weekend or the Cornish Gorsedd, because they’re supposed to be “news in Cornish” and not “news about Cornish”. So it’s a five-minute summary of that week’s news in general.

I mentioned this a while ago — wondering how to respond when other people, on hearing that someone is learning Cornish, respond with disparaging comments like “Why bother learning a language that no-one speaks and that doesn’t have any real use in the world?”

Having recently been in Cornwall and attended the fantastic Cornish Language Weekend, I can at least confirm that it’s NOT a language that “no-one” speaks — there is in fact a much bigger variety of people who are deeply interested in learning and speaking Cornish than I ever imagined! But while I was over there, I quite unexpectedly ran across what I reckon is a PERFECT response to “why bother” comments.

While I was staying in Penzance, I visited a lovely bookseller who specialises in classic children’s books (another interest of mine), and we got to talking. It came out that she was a fellow Tolkien fan — to the point that, years ago, she taught herself Elvish. *

With all respect to her and other conlang enthusiasts, I couldn’t help thinking at once, “Ha — and next time someone tries to tell me that Cornish is a useless language that no-one speaks…!!!”

(*I neglected to ask whether it was Quenya or Sindarin.

I was actually very interested myself in learning Quenya when I was at school:)

Anyway, I think that measuring languages according to how useful they are in the modern world is stupid and wrong, and the first languages we would have to forget if we adopted this point of view would be Latin and Ancient Greek.

Well, as I said, no offence intended to fans of invented languages.

I can understand the attraction — I’ve been a Tolkien fan from a young age too and have always been awed by the time and care and effort he put into not only creating such an elaborately imagined world with thousands of years’ worth of its own history, but into inventing several fully worked out languages for it!! Very few other fantasy authors have ever come anywhere near to that achievement.

Anyway, I think that measuring languages according to how useful they are in the modern world is stupid and wrong, and the first languages we would have to forget if we adopted this point of view would be Latin and Ancient Greek.

So true — I was thinking that myself. There’s an article I found recently, written by a teacher of Scottish Gaelic, that argues very strongly against the idea that we should only learn languages that are seen as “useful”: Don’t neglect the UK’s indigenous languages

There are those who would claim that such languages aren’t “useful” in the modern world and the global job market, and are therefore irrelevant to the current debate. “Why are you wasting your time with Welsh/Gaelic/Irish/[insert your minority language of choice] anyway?” scoff the naysayers. “We should all be learning Chinese!” Needless to say, the so-called reasoning behind such statements isn’t about getting to know China’s culture, heritage and people; rather, it’s about how it could help you make money. But while Mandarin Chinese may well be useful for an international businessperson of the future, we don’t only use language to earn money and do deals: we use language to communicate. To say there is no worth in learning a language that isn’t economically useful is like saying there’s no point in being friends with somebody unless they’re going to help you get a better job. It’s a spectacular, cynical miss of the point.

Yes, there are different ways of looking at languages - some people see them as objects of art, or, even, entire universes with all their uniqueness and beauty, and others see them as instruments for making money. The sad part of it all is that the second group is convinced that its way of thinking is correct and it is normally the one that takes political and financial decisions.

Yes, like the UK Government’s recent decision to axe all funding for the Cornish language…

There was a link to a petition about this in another discussion thread, for anyone who hasn’t seen it: Cornish schools in Cornwall to further the Cornish language?

Cornish schools in Cornwall to further the Cornish language?

… the tiny of amount of money the language was receiving from westminster has been axed completely a few days ago. Please sign the petition to condemn this decision and demand the reinstatement of it. X https://petition.parliament.uk/petitions/128474

I was referring to this decision… Really shameful.

Here’s a recent Twitter post with a simple yet excellent graphic explaining what Cornish is good for… (no, not “nothing”! 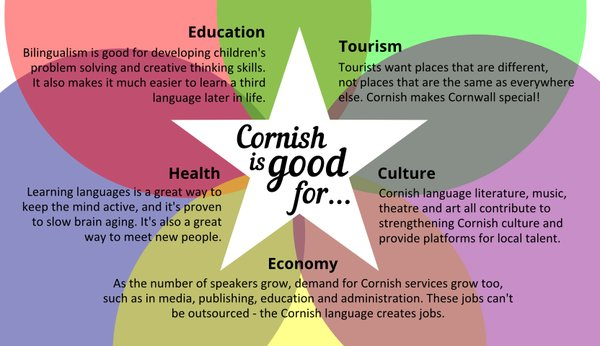 And it would make Captain Ross Poldark happy

Oh, but it would indeed.

I knew they were “our people”

(I don’t know if there’s an expression like this in English, but in Russian we say “they’re our people” meaning they think like us)

Here’s a Guardian article about the funding cut (with a dreadful attempt at a pun — if they only knew, the “-now” in “Kernow” isn’t pronounced like “now” in English!!):

You will be pleased to know that I have just added my signature to the cause Courtenay. We should be getting very near the required number of supporters now.

Here’s something else that could do with some support from people who speak (or are interested in) Cornish — I just received a link to a poll at https://www.businesscornwall.co.uk/ : “Should Government fund the Cornish language?”

The poll is hard to find (and I don’t know how long it will be available), but if you scroll down the homepage, it’s a fair way down on the right hand side.

I’ve no idea whether the results of this poll will have any impact at a higher level, but at least it’s another way of getting the word out, so please do vote “yes” if you care about Kernewek!

Hello, Courtenay, I started this course last week. I’m on lesson four now and it’s pretty cool so far. I had actually held of on starting this one for awhile because I was concerned that there were only 10 lessons and therefore I would only be able to get so far, but after reading some other forum posts I guess just a little more patience and we will have another dose coming our way soon.