A resource I *won't* be using

When I was in Cardiff last week I went round my mum’s house gathering up some old books etc in Welsh and I found this one. 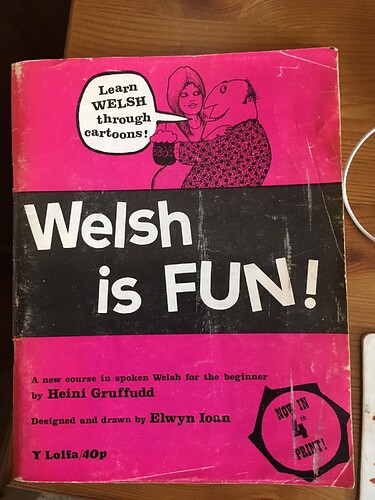 So funny, sometimes we forget just how politically incorrect things used to be!

I have a confession to make.
I brought this and its companion, “Welsh is Fun-tastic” to @CatrinLliarJones 's book exchange at the last SSiW birthday party. In my defence, however, I did post this specific health warning on the forum beforehand.

I left without them so I assume that someone took them. Should I be worried about their moral well-being?

By the way, I believe that one of the authors, Heini Gruffudd, is still an active promoter of the Welsh Language. I wonder what he thinks of these early works now.

Wow - we’ve got that book, but our much newer edition, whilst cheeky, is nowhere near as raunchy as that!
It is a good book, although I really hate the way it tries to represent pronunciation.

Isn’t he the one who has written “Welsh Rules” and acompanioned Exercises to that???

I believe so. I think he was and is quite prolific.
Here’s some “interweb” stuff about him
Heini’s Prifysgol Abertawe page
Heini’s Y Lolfa Page

Yes, if he’s on Y lolfa, then he is the one. I’ve bought Welsh rules from Y Lolfa so I’m sure he’s the one. Yah, would really be interesting to hear what he thinks about this early work.

Interesting! I like the look of his eisteddfod board game. To be fair I’m sure there was lots like this in the 70s, and it may have mostly been down to the cartoonist.

I have a book of Heini’s upstairs that I’m going to have to take some photos of.

It teaches you Welsh through photos. If you can remember the photo diaries in the back of newspapers, something like that! It tells the story of a Plaid MP who comes around a ladies house to ask for her support, she complains of a flying cow, he fixes a hole in a fence, the cow flies out - they start having an affair - and that’s as far as I am at the moment.

It really is some surreal stuff!

I have a book by the same author, with identical drawings by the same artist, entitled ‘Cornish Is Fun!’ - we can be bilingually politically incorrect now… 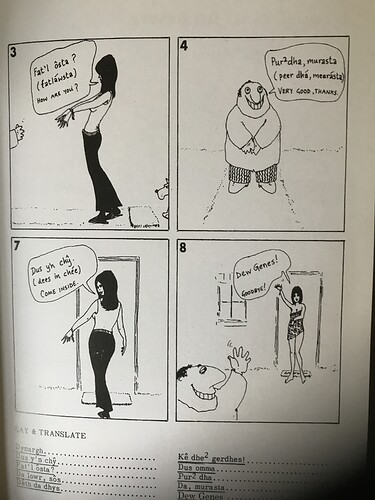 Come to Tŷ Tawe often enough and you’ll find Heini behind the bar or making the coffee for the siop siarad learners’ mornings and you can ask him about them!